Cool Cars on a Hot Day

The Texas Invasion Auto Expo, presented by 9GensoSiety, took place in San Marcos, Texas, Municipal Airport this past Saturday. I decided to attend and give myself an excuse to drive the 2016 Chevy Volt on a small road trip.

The show also including World War II era aircraft that were also on display next to the cars. The show itself was on an active runway which I thought was very cool. This was the first car show I attended in which modern cars outnumbered classics. I saw plenty JDM’s and Euro Imports but only a handful of American muscle and traditional hot-rods. Not that it was a bad thing, but I realized how accustom I was to seeing muscle cars at these kind of events.

I saw some very interesting cars here. Including a holy grail in the form of a 1963 Split Window Corvette Stingray that wasn’t even part of the show! It was hidden behind an airplane hangar and my curiosity told me to sneak in to take a better look at the car. Worth it! Vintage airplanes and classic corvettes go together like red, white and blue. 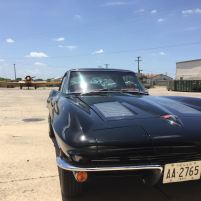 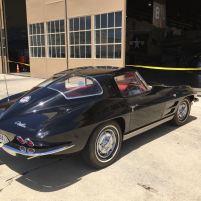 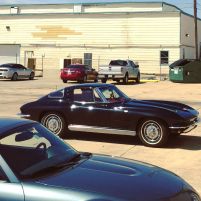 There were two rat-rods at this event and each one represented a different generation in style. One was a traditional rat-hot truck with a law enforcement theme. As with any rat-rod, the art is in the details. Cherry top on the roof, souped small block with twin stacks, a seat with multiple badges sewed in, floorboards made up of shotgun shell brass, and oh, a sawed-off pump action shotgun for a shifter! This was one bad-ass tribute to law enforcement. Must be quite a thrill to go chase punks in.

The other rat-rod was a modern take on the subculture. It was a 1991 Honda Civic that looked like it was one pot hole away from falling apart like the Blues mobile at the end of the Blues Brothers movie, but that’s the idea. Bonkers! It had double hinged suicide doors, no front fenders or hood, a worked over engine, and details galore! I could walk 20 laps around the car and find a new detail each time. I couldn’t find the owner but the car had club decals on it. The founder of Royal Alliance, if you’re reading this… nice ride.

I only heard about the event because my good friend Bianca Ramirez, aka binx4 on Instagram, told me she was entering her 1966 Ford Mustang, and modeling. She has been hiding this car from me for years because I figured she knew I’d ask to drive it, but now I was finally going to see her mystery pony car. This was the first car show she was competing in and her 1966 Mustang is packing heat in the form of an angry 351 Winsor and custom hood. Bianca drove it from San Antonio in traffic with no issues to report. She ended up taking 2nd place at the show in her class. 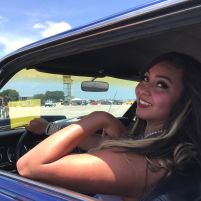 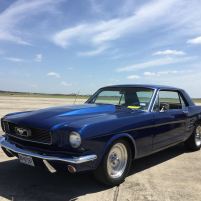 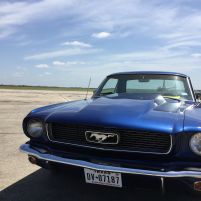 I was surprised to know that there is a growing popularity with Korean made cars, Lone star KDM. There was a car club of only KDM’s and there were a lot of modified Kia Optimas. I thought this was so cool because my mom, who isn’t into cars at all, drives a 2015 Kia Optima turbo. Nice to see that Kia is steadily getting rid of their disposable eco-box reputation.

The term “JDM” gets thrown around a lot and it stands for Japanese Domestic Market. This is a reference to cars build in Japan, but is now used as a status label on any car with a Japanese auto-manufacture hood emblem. I saw more Honda SI’s that in the word Mississippi and they were all lined up neatly. But, there were 3 real JDM cars parked behind the wall of V-TECH and they were beautiful. 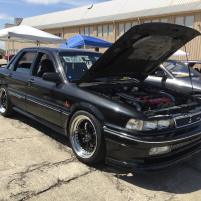 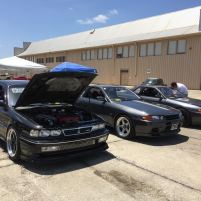 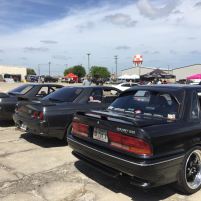 Two 1990 Nissan Skylines GT-R’s, with left hand drive, and one LHD 1991 Mitsubishi Galant VR-4. All three looked perfect. Not too flashy and not bumper less drift cars. Just clean examples of some of the best performance cars Japan had to offer in the 90’s. Huge respect to the dedication these owners have.

Another interesting vehicle I witness at the event was the San Marcos SWAT team’s new ride, which like a lot of police officers, was also ex-military. Named The Caiman, this behemoth tips the scales at 48,500lb of brute strength and can run after bad guys at up to 65 mph. I stands 10 feet tall, 8 feet wide, and 21 feet in length. The driver of the Caiman looked like actor Gregor Clegane who plays the Mountain on Game of Thrones. Did I mention this machine can deflect just about anything short of a missile? 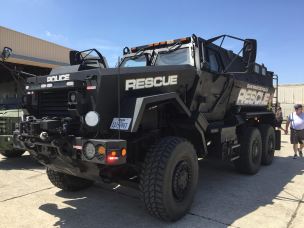 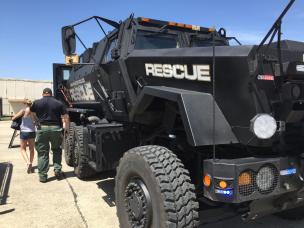 Remember the Pontiac G8? This guy has a 2009 GXP model with an LSX engine, and a turbo bigger than my head, pumping out 850 hp to the rear wheels!

Cool cars and Texas heat was not enough to overshadow the planes though. I always loved airplanes of this era. The design, the engine noise they produce, the artwork. They look so majestic standing still. Their stance makes them look like their throwing their chest out with pride like Superman. The event even had a helicopter giving out rides to people. That’s something you won’t see at SEMA.

I had a great time at the 2016 Texas Invasion Auto Expo. I nearly sunburned my forehead for being too thickheaded to bring a hat, but being around all these machines was well worth it. 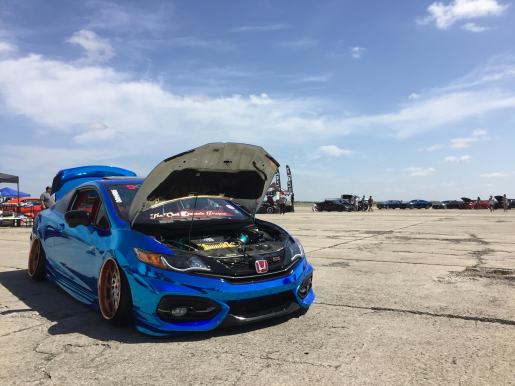