I remember my father had an early 90’s Buick Regal when I was a kid. This must have been in 1999 or 2000, but he acquired the car to make a quick flip. That car was maroon with a red interior. It felt like you were sitting inside a slice of red velvet cake. That car impressed me as a kid because my brother and I were allowed to eat our happy meals in the back seat. My father wasn’t worried about us dropping food or spilling our drinks because the car would just float over all the bumps in the road.

When I found out I was going to road test the new 2017 Buick LaCrosse I was static. The idea of test driving a full-size Buick took me back to that maroon Regal, watching my dad drive using just one finger on the steering wheel while I sucked soda through a bendy straw in the backseat.

It used to be that certain luxury cars were built for comfort with style and 0-60 times were an afterthought. I do not know when people decided that all luxury vehicles need to be sporty as well. Now, anything with leather seats is equipped with a sport button and enough power to impress even the heaviest of lead foots. I get nostalgic thinking about cars that had so much power steering that you could make a 3-point turn using just an index finger; the boulevard cruisers of the last century. However, my week with the 2017 Buick LaCrosse showed me a happy median between floating like a butterfly and stinging like a bee.

All new design for 2017. The Buick Lacrosse shed 300 pounds without sacrificing any comfort space for its passengers. Photos don’t quite capture just how big the 2017 Buick Lacrosse looks in person. Buick says that a lot of the Lacrosse’s styling cues were inspired by their award winning concept car the Avenir that debuted in 2015.

The Lacrosse’s design is the new face of Buick. The tri-shield insignia, in its traditional red, silver, and blue colors, is set center fold on a black large opening grille that looks identical to the Avenir concept. Buick’s new image is meant to promote a modern sophistication of confidence with purpose. The quicksilver metallic paint gives the Lacrosse a space-age look that make a parking lot of 2016 vehicles feel outdated.

Buick made the Lacrosse longer, wider, and lowered the roofline. These new measurements give the Lacrosse a sleek and dynamic presence as it sits low to the ground. Like a CEO resting comfortably in a desk chair after successfully brokering a huge deal. 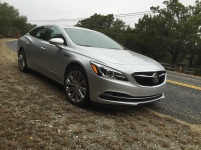 I found myself looking back at the Buick Lacrosse whenever I walked away from it because I enjoyed admiring its handsome design. Its sculpted body lines are crisp and sharp without coming across as aggressive or intimidating. The 20 inch painted aluminum wheels complete the image for this eye catching design.

I’m not a tall fellow, standing at 5’ 7’’, so I’ve never had trouble getting in and out of vehicles, but I will say that even with the Lacrosse’s low roofline the car is still tall people friendly. The wide body allows for vast amounts of space inside for all passengers. According to Buick, this is their first car to have a single cockpit design. The dashboard wraps around the entire width of the car giving it a spaceship vibe when you sit behind the wheel. A friend of mine referred to this car as the “Shaq Space Cruiser”, referencing the time Shaquille O’Neal did a commercial for the Buick Lacrosse a few years back. We always wondered how he was able to get in and out of the Lacrosse, now I see he probably didn’t struggle at all. 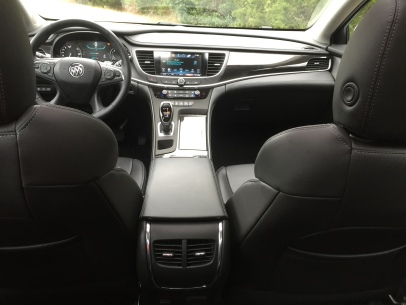 This particular model had the optional Driver Confidence package which included features like: adaptive cruise control, automatic brakes for the front, parking assist, and front pedestrian detection. But even without this package you will still get memory electric seats, forward collision and blind spot alerts, backup camera, 10 airbags, an 8 inch display on the dash, and lane assist as standard safety and security. Trunk space is abundant with the Buick Lacrosse as you could image with a car of this size.

The weather started to get cold during my week with the Buick Lacrosse so I got to enjoy, to full extent, the Lacrosse’s heated leather seats and steering wheel during my chilly morning commutes to work. The interior of this car is a very nice place to be. Modern luxury giving you quality over quantity with a minimalist dashboard that gives you just what you need.

The Lacrosse features a “floating” center console that puts the gear shifter high and close to the driver for easy reach while creating a storage space underneath it for iPads, handbags, etc. I getting used to driving a full-size Buick around town was a delight. Its size was never an issue in parking lots thanks to its backup camera and warning sensors as they guided me through the tightest of spaces without having to strain my neck muscles.

Specs and Performance of 2017 Buick LaCrosse

The 2017 Buick Lacrosse is powered by a 3.6 liter DOHC V6 that puts out 305 horsepower, and 268 lb-ft of torque to the front wheels through an 8-speed automatic transmission. The Lacrosse is no land yacht on the highway having more than enough power to launch on command if the driver needs to make a sudden overtake. Or use the sport button to pull away from anything or anyone in your rear-view mirror.

Buick developed an all new twin-clutch AWD system that is also available on the Lacrosse. The new AWD system provides the best grip and handling Buick has to offer that splits the torque between the front and rear wheels, while the twin-clutch design controls the amount of torque given to each independent wheel. 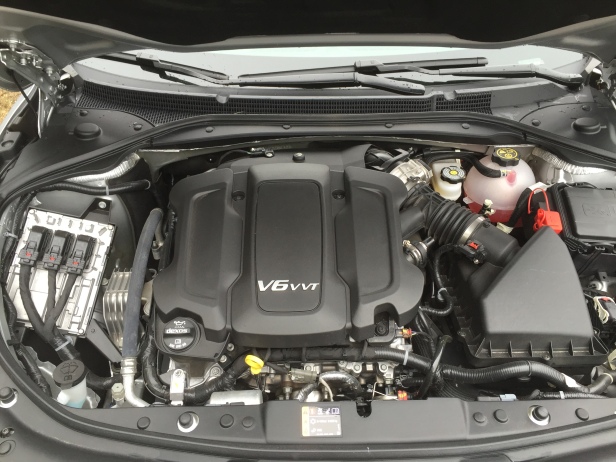 Even without AWD the Lacrosse did not feel clumsy or out of its element when I took it through corners at high speed. The chassis stuck to the road and I never felt the body wanting to roll or understeer. I had to look down at the speedometer to make sure I was actually going as fast because as the Lacrosse took every corner with total control; making it look easy. It’s a full size Buick that handles with the grace of a dancer. I experienced the four wheel disc brakes during a panic stop in rush hour traffic, and I can tell you that the 2017 Buick Lacrosse can stop on a dime if needed.

The Buick Lacrosse gets an average 25 MPG with 21 in the city and 31 on highway. It comes equipped with Active Fuel Management that shuts down two cylinders when the Lacrosse in on highway to make it more fuel efficient. As well as stop/start technology that turns the engine off when you are stopped at light with your foot on the brake in order to conserve fuel.

Pricing for the 2017 Buick Lacrosse ranges from 33K up to 49K depending on options. The model I drove was stickered at $48,000 and change.

No complaints with the 2017 Buick Lacrosse, but I did have a moment of realization during the road test. It happened when I stopped to pick up dry cleaning while dressed in my usual shirt and tie that I wear to work. I was walking back to the Lacrosse holding my freshly pressed dress shirts when I looked up at the confident full-size luxury sedan and thought, “I’m I officially an adult?” I’m still young and most people in their early 20’s are just kids in adult clothes. I like to think that the 19 year old version of me would be thoroughly impressed watching me climb into a big luxury car while sporting a nice watch and neck tie. It paints a nice image of goals that have been met while foreshadowing more to come.

The 2017 Buick Lacrosse is a car designed to appeal to wisdom and maturity. It’s a vehicle for the person who has achieved something in their life and wants a car that represents it without feeling like they are shoving their success down people’s throats. It’s for the modest confident individual who understands that hard work should always be rewarded. I would recommend taking the 2017 Buick Lacrosse on a test drive if you are the type of person who knows exactly what they want in this world.

Join 1,234 other followers
Follow Jesus Behind the Wheel on WordPress.com