The Other Side of the Spectrum

I thought it was cool opportunity to switch from the 2017 Buick LaCrosse into the new 2017 Buick Encore, because it was going to give me perspective. Having just driven the biggest sedan Buick has to offer I was now going to step into the other side of the spectrum by driving their smallest vehicle. In a state that is famous for putting things in terms of scale I was interested in seeing if size matters when it comes to the compact crossover that is the 2017 Buick Encore.

I must admit that before I took the keys to the Encore I was already making assumptions. Judging its size as another pretender wanting to be a contender. A global car fitted with leather seats and a higher price tag to meet EPA standards for Buick. After spending a week with the silver Encore I can tell you that it was one of the few times were I was glad I was wrong.

All new design for 2017. The previous model reminded me of a bunny with its ears folded back. Cute. This new design has taken a razor to sharpen the old model’s rounded edges giving it a more aggressive, confident, look. Like a teenager who was blessed by puberty over the summer and comes back to school to turn heads. I especially like the dark headlights with LED’s that make it look like it has eyebrows. The Encore’s face is chiseled with a sense of determination. It wants to be the best at what it is, a crossover.

I caught myself admiring the Encore more than the LaCrosse because it looks so cute. Not cute like a puppy eating ice cream, because although the Encore does look endearing it still gives off that hint of masculinity. As a young guy, I never felt embarrassed to be seen stepping out of the Buick Encore in public while wearing my black cowboy hat and boots. Also new for 2017 is the 18 inch wheels this particular Buick Encore is sitting on. Not sure what it is about modern Buick’s but they seem to best in silver.

One thing that still haunts me from my brief time working as a rent-a-car employee is remembering how often people complained about the size of cars. God forbid a customer had to go from their usual Altima into a Sentra. They would complain as if we had given them a unicycle to take to the airport. Flashbacks of this came to mind as I reached for the door to step inside the Buick Encore for the first time. Once inside it was a completely different story. I felt it was in Mary Poppin’s travel bag; small on the outside but an entire universe of space on the inside. The Buick Encore has a spacious interior that is misleading for its size. But, the Encore is narrow too so expect to rub elbows if you are a wide shoulder individual. 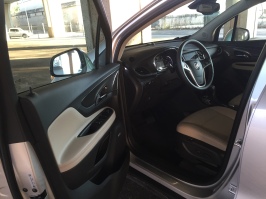 I felt just as comfortable in the compact Buick Encore as I did in the full-size LaCrosse. I had heated/cooling seats, Apple Car-play and Wi-Fi, keyless door entry, push-button ignition, moon roof, blind spot warnings, front collision sensors, back-up camera displayed on a 8 inch touch screen, 10 air-bags, and a quiet cabin to enjoy satellite radio through the Bose equipped stereo.

The great thing about crossover vehicles is that due to their tall roof line they are very easy to get in and out of. It’s like hopping on to a bar stool. You open the door and just slide in. The electric seats and arm rest in the Encore allow you to adjust the driver seat into feeling like you’re sitting on a traditional rocking chair. I never felt fatigued while driving the Encore because of the seating position. In rush hour, holiday traffic, or my morning commute I did not stress because I was basically just lounging in an arm chair. The Buick Encore can be a good travel vehicle if needed.

The Buick Encore gets around thanks to a 1.4 liter DOHC EcoTec turbo charged four cylinder engine that puts out 138 horsepower and 148 lb-ft. of torque. Bolted to a 6-speed automatic, the 1.4 liter engine makes a nice little rumble noise when you need to overtake someone on the highway. Granted the Buick Encore is a bit of a heavy-weight tipping the scales at over 3,000 pounds, so do not expect it to perform like a nimble hatchback. All Wheel Drive is available on the Encore as well as a more powerful engine that puts out 153-hp.

The Buick Encore is available in five different trim levels.  Base, Sport Touring, Convenience, Leather and Premium which is the one I was testing. Price range for the 2017 Buick Encore starts at $25k and quickly jumps to $35k with options. The one I drove had a sticker price of $34, 075.

During my week with the Encore I had to do my holiday shopping. That meant using my entire Saturday driving all over town in search of gifts for my family. I spent close to 8 hours in holiday traffic and overcrowded malls, which is my idea of hell on earth. I was grateful to be driving the Encore. Its small size meant I had no trouble zig-zagging through parking lots and its comfort allowed me to decompress before having to into another store full of last minute shoppers. When I finally got home with an Encore full of shopping bags I was tired, but not fatigued.

A motoring colleague with decades more experience than me assured me that I was going to enjoy the 2017 Buick Encore. He even gave me the old “I told you so” line. When I took photos of the Encore for this review I went to the Pearl district in downtown San Antonio a place where the Encore would fit right in. The Pearl was once a brewery, an industrial area with brick buildings fueled by the sweat of testosterone. It has since been recycled and turned into one of the hippest places in town.

The brick office buildings are now stylish overpriced apartments. Specialty boutique and shops circle the apartments and the brewery itself is now a restaurant and luxury hotel. The reason why I felt the Buick would fit in is because I saw at least three other Encores driving around the place.

What I learned from driving the LaCrosse and the Encore back to back is that the Encore is not a small car trying to be a luxury vehicle. The Buick Encore is a luxury vehicle that happens to be small. If you live in a city where space is an issue but want a vehicle that has all the creature comforts offered in a full-size sedan then this is a contender. Size matters when it comes to urban living and the Buick Encore gives you the luxury you want without taking up space you need. 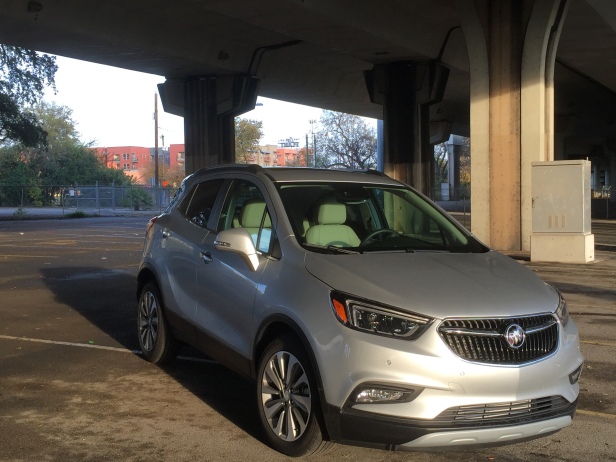