Disney Made This Film for Enthusiasts

I know what you’re thinking, “How is this underrated? It’s a 50 year old franchise with 6 movies, a short lived TV spin off, and a cult following.” Yes, all true, but I’m young so many people in my generation are only familiar with the last movie, Herbie Fully Loaded (2005), which was 90 minutes of Lindsey Lohan screaming at the camera and a CGI Volkswagen driving over race cars.

I’m here to talk about the original film of the franchise from 1969, The Love Bug. A Disney film that was made with racing enthusiasts in mind. This is Steven McQueen’s LeMans (1971) for kids.

I first saw The Love Bug as a child when my father recorded a screening of it on TBS. I still own the VHS tape; complete with 90’s era commercial breaks. As a child I wasn’t paying attention to what the characters were saying because I was content with watching race cars and seeing a white Volkswagen Beetle perform outrageous stunts.

Over time, I started to understand the movie more and more as my knowledge on cars grew. The Love Bug has the same amount of car lingo in one movie than all the Fast and Furious movies combined. It has more scenes that only those who are obsessed with transportation can truly understand. However, most people remember this because it’s a Disney film from the 1960’s.

To prove my point I have gathered scenes and quotes that only people in the auto world can fully understand and appreciate. One of the first scenes is when Jim Douglas, played by Dean Jones, meets Carole Bennett, played by Mitchell Lee.

The two start in playful banter before Jim sees the Thorndike Special, a 1963 Apollo 3500 GT , and immediately locks eyes on it. His reaction is misinterpreted by Carole who thinks he is talking about her. This is text book “car-guy” behavior, when a guy is more interested in a car than a woman. Not because he’s sexist, but because he loves cars just a fraction of a percent more than women for whatever reason.

The scene where Carole is showing Jim just how easy “Herbie” is to drive after his first experience with the little car. Through conversation she recognizes Jim as a driver and briefly goes through his resume of wrecks. 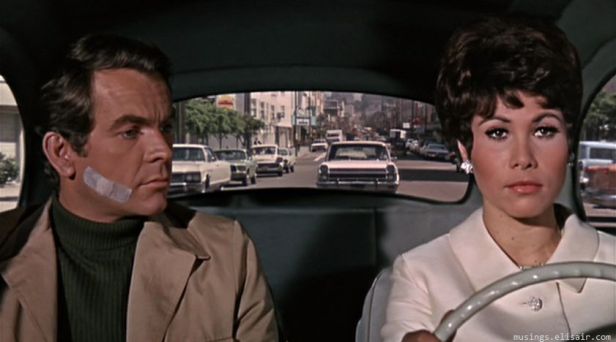 Carole: “Let’s see… Two years ago at Laguna Seca you spun out and hung a beautiful Buick special on the back fence… At Willow Springs, was it a year ago last February, you sprayed a Lotus all over the infield.”

Carole: “I have trouble with names and faces, but I never forget a car.”

Now who but a racing enthusiast would understand what the hell she just said? I imagine most were probably trying to figure out what Laguna Seca was. Children probably saw it as just boring grown up talk. When I used to write for my college newspaper I got red marks for using the word “sprayed” to describe a car accident. The editor even wrote a note saying “you can’t spray a car on the road.”

Another scene is when Buddy Hackett’s character, Tennessee Simon, is trying to convince Jim that this is no ordinary VW Beetle. How machines can absorb the care and devolution we give them.

Tennessee: “We take machines and stuff with information until they’re smarter than we are. Take a car. Most guys spread more love, time, and money on a car in a week than they do on their wife and kids in a year. Pretty soon the machine starts to think; it is somebody…”

Anyone who’s given their vehicle a pet name or takes pride in making sure they are always spotless can sympathize with Tennessee’s philosophy.

Video is a scene where Tennessee names the Beetle Herbie and Jim enters it in his 1st race.

Dean Jones’ character, Jim, is a driver who suffers from a bruised ego after not making the grade as a top driver. At the beginning of the movie his career as a driver is near “has-been” as he competes in demolition derby against drivers nearly half his age. Although he tries to act tough he knows that his skill has failed his ambition. One quote in particular explains this when he is talking to Tennessee after winning his first race with Herbie. Of course, Jim still does not believe that Herbie is self-aware. He thinks that it’s his own driving ability, and an unknown turn of speed from the factory, that pushes the Beetle beyond the laws of physics.

Jim: “Tennessee, I wouldn’t admit this to anybody else… But I was beginning to think I would never be anything more than a piston happy, lead foot punk.”

You don’t have to be a fan of the scent of gasoline to understand the depth of Jim’s confession. Anyone with a big dream lives with a constant fear of failing to make their dream come true. The “what if” that pops into their heads when day dreaming about life after they are too old, too weak, or too late to reach their goal in life. It’s the same fear that usually keeps those people moving forward. Like when you catch yourself walking faster than usual towards the safety of your bedroom after turning off all the lights in your house. The fear in the paranoid thoughts of someone, or something, jumping out from behind you in the darkness. I’m getting off topic here, so moving on…

People that love cars for what they are will understand this next quote. The scene where Herbie is near death thanks to a grueling road race. Jim is faced with a choice of patching him up and continuing on, or quitting the race. It’s one of my favorite scenes because it tries to explain what other famous car people like Jeremy Clarkson, Eric Bana, Jay Leno, etc. have tried to do, which is define the bond we form with our cars.

Jim: “There’s been a lot of goop written about a man and his automobile. How he hates it sometimes but always loves it. Showers gifts on it in a way of accessories and all that. Gets hysterical if somebody scratches the paint or makes it lose face on the freeway. Maybe some of those feeling got into the machinery, I don’t know… Tennessee thinks so.

Jim: “There is something real about that little car. Something that doesn’t even have a name…”

It’s an unusual trait to love a machine. Petting the hood at the end of the day as a nonverbal “good job” for bringing you home safe and sound. To smile whenever you hear the engine turn over without a misfire or hiccup. To stare at it for too long after spending an entire afternoon washing and waxing it in 90 degree weather. Others may question it, but we don’t bother with trying to understand it; we just do it. The only times I’ve had to explain myself for naming all my cars, or why I collect “old” cars, is when someone who isn’t a car fan questions my behavior. Those who share my passion for cars just get me, because they too are under the spell of the automobile.

Why Every Car-Fan Needs to Watch This Film

Because it’s genuine. The stunts are real, featuring the driving talents of stuntman legends like Bill Hickman (Bullitt) and Carey Loftin (Duel). You see cars that are now considered six figure auction pieces being hooned around race tracks with a little, Porsche powered, Beetle running circles around them. 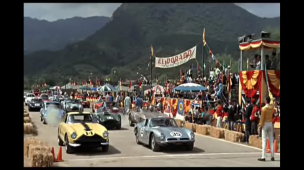 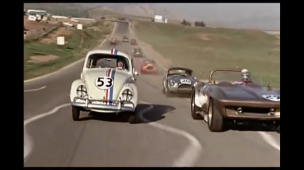 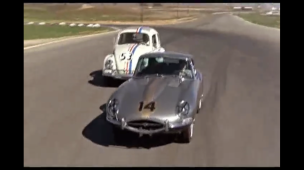 Yes, there are some imperfections in the movie. For example, political correctness was vastly different in the late 1960’s compared to now, so there is a vague sense of racism. Also, the film doesn’t really have a moral lesson except that cheaters never win.

I firmly believe that every self-described automotive enthusiast should watch this film. Doesn’t matter how old the movie is, or that it was produced by the same people that gave us Marry Poppins. This is a Disney film that was made by gear-heads, for gear-heads. While doing research for this article I found that Jalopnik’s own Jason Torchinsky also had similar opinions when he wrote about his favorite car movie, The Love Bug.

If I have not convinced you yet, why not let the movie do it for me. Below are some clips of the film to coax your judgement.

Join 1,233 other followers
Follow Jesus Behind the Wheel on WordPress.com