It was another day at the Buick dealership. Another day of being shown off by Buick salesmen in their patterned suits, squeaky loafers, and slicked back hair as they paraded people, who had no business in a car like myself, around me. People getting inside me with their dirty shoes, messing with my buttons, and asking for test drives. Hearing them try to haggle over my sticker price always annoyed me. I’m a premium machine, a Gran Sport! I don’t want you if you cannot afford me. This day, however, was different because he walked in…

The first moment I saw him I knew he was different. Wearing a silver suit that shined like chrome, diamond pinky ring, and carrying big wads of cash in his black leather coat. He paid for me in cash! I can still remember the expression of disbelief on the salesmen’s face when he saw all that bread being laid out on the table. “Wrap her up, I’m taking her home today!” my new owner exclaimed with a cocky grin as he pointed to me. I had never seen a man so confident and aware of his motives. He knew what he liked, and had the money to obtain it, and what he liked was me.

He wasn’t the tallest man, but you would think he was seven feet tall by the way he carried himself. Always dressed in the finest suits and sporting different tinted color glasses each day. He had at least four different pair of sunglasses displayed on my dash. I always made sure to drive as smooth as possible as to not disturb them from their place. I could feel the rim of his gold rings when he grabbed the steering wheel. He must have been a very important man because he never bothered to lock my doors wherever we went. As if he knew no one would dare try to rip me off.

I was painted gold with a white vinyl top and brown leather interior; I was such a stunning machine back then. Didn’t take long for my owner to start spoiling me by buying me a set of white wall tires and chrome wheels to make me look more distinguish against those snobby Eldorados and Continentals. He always drove well-mannered and never abused me, always making sure I was warmed up before setting off. On occasion he would put his foot down to remind himself that I was much more than just a pretty face. My big 455 heart would suck up air and turn gasoline into torque as I ran up to 110 mph, hovering over any imperfections on the road. He was the coolest cat I had ever met, and other people seemed to share my opinion.

One day I remember being taken to a warehouse to see a mechanic dressed in street clothes. The man took a blowtorch to my trunk and made a hidden compartment in me. It didn’t hurt, but I felt strange having a hole cut in me for no reason.

From then on, my owner, who was often referred to as “The Jockey” by people who greeted him, would take me all over town for work. I never expected to be used as a hauler, but we went to the docks and he loaded a big brick shaped package into my trunk. We drove home and by the end of the night he had dozens of little golden brown bags that he placed in the trunk’s hidden compartment.

That’s when we would go to work – cruising into the darkest parts of the city. A side of town full of degenerates and vagabonds, no place for a Grand Sport like me. I hated rolling on filth covered streets and having low class women sit on my hood while my owner was inside a nightclub, working. Sometimes he would park me in a cold dark alley so he could check whatever it was that was hidden in my trunk.

Going to work was always a nightmare of being surrounded by the scum of humanity. Once, a drunkard used my wheel as a urinal before losing his balance and falling over onto my rear fender. I felt his weight of soiled regret on my body work and wanted to shake him off like a horse brushing off flies with its tail.

Degenerates were always hounding my owner and would lean on my doors whenever they begged him for something. “I’m jonesing man, just need a taste to get me through the week!” One vagabond said to my owner. I didn’t understand what he wanted or why he seemed so desperate. He couldn’t stop twitching and looked as if he was about to have a nervous breakdown.

The nights were rough but the days were worth it. My owner loved taking me on scenic routes and dined at the finest restaurants where I felt more at home in the valet parking lot being hand washed by the staff. The sun would dance off my gold paint wherever we went and I loved hearing my voice sing as my 455 heart hummed with the smoothness of a knife slicing through butter. Those were the days I truly enjoyed being with my owner.

I felt like the good times were going to roll on forever, but suddenly it came to horrifying halt.

Night of No Return

It was a particularly dark night as the moon hid amongst the stars. I was sitting in the cold alley waiting for my owner to take us home. Suddenly, I head a noise in the shadows near the dumpster that was next to me. I saw two figures lurking, trying to hide themselves as best as they could. Then I heard the sound of my owner’s boots hitting the pavement as he made his way towards me from the rear. The two figures began to move out of the shadows and I saw that one of them had a switchblade in his hand.

I couldn’t see what happened because they were behind me, but I heard one of the men threaten my owner with the knife in exchange for the money he had. I didn’t hear my owner speak, all I heard was the commotion of shoes scrapping along the asphalt followed by the sound of a gun be fired! A sickening noise of air being forced out of a person’s lungs was next, followed by the weight of a body being dropped on my trunk lid.

Something warm began to spill on my paint and drip off my bumper. A pair of running footsteps was the last thing I heard before everything went silent. Minutes felt like hours as police sirens echoed in the distance. I had an idea of what the weight on my trunk was but was too scared to even imagine it. The weight on my trunk started to shift slowly as I heard the sound of his last breath before feeling the full weight relax on me. I knew what it was, but I did not want to bare it.

When the police arrived I heard them say that he had tried to pull a gun but was overpowered and stabbed repeatedly. My owner had been killed trying to defend himself and had bled out lying on my trunk. I was devastated that he was gone. I loved him…

I was towed to the impound yard where I have remained ever since. My paint has long been burnt off by the sun and I am no longer the stunning machine I was in 1972. Rats have turned me into a motel and I sit with the guilt of not being able to warn my owner. I doubt I’ll ever have another owner again because of how ugly I look. 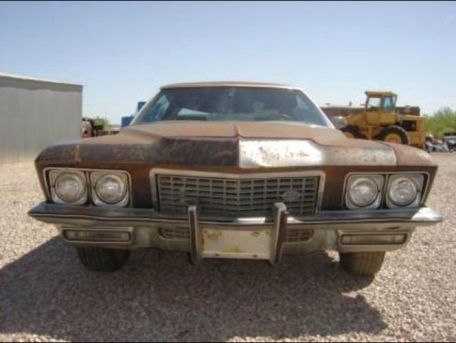 All I can do now is park in silence with memories of coastal runs and turtle wax massages. The memory of my owner will live on in the bags of golden brown hidden in my trunk.