“Another Gentlemen’s Jack, please.” The man said to the bartender. His third one of the night that foreshadowed the seven more to come. He watched as the bartender, Perry, made his drink of Jack Daniels, still water, and just four ice cubes. Same way Frank Sinatra liked it. When he got it he stared at it. Admiring the color. Golden brown that matched the wood of the bar counter. Sinatra always waited 2 minutes to let his drink “set”, but at age 34 he had outgrown the need to wait. Instead, he picked it up and started sipping it like fine brandy. 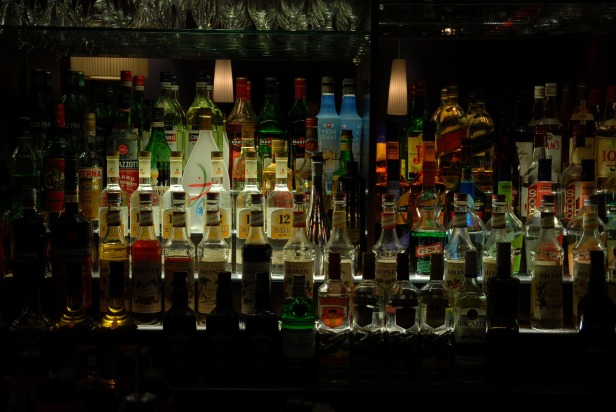 He sat there in his favorite bar stool filling his stomach with Tennessee whiskey. Reflecting on the mediocre of his life. A stable job working as an accountant at one of the top law firms in the city. Respectable, well paid, and secure. “What’s wrong with that?” He thought. “Because it’s boring. You used to jump out of planes, for fun. Travel with nothing but a backpack and a week’s pay in your pocket. What happened?” He knew damn well what happened. He met a girl. Fell in love. Got divorced after less than half a decade, and settled for a good paying job to meet alimony payments. He was still nursing the wounds she had left. That’s why Friday night was always bar night. There he could sit among the familiar, watch reruns of MASH, and drown the bubbling feeling of regret. He felt burnt out and hated himself because he was too young to feel that way. An ex-adrenaline junkie bored with retirement.

Just then a sound overpowered the atmosphere of the crowded country bar. A sound that excited many and scared few. The sound of an overpowered engine idling outside. He turned to the peak through the crowd at the window overlooking the parking lot. He couldn’t see much, just a glimpse of a red pop-up headlight closing. A minute later a stranger walked in. He was sporting a black motorcycle jacket dressed in official looking badges and stripes. He wore tinted glasses and a ten gallon cowboy hat that made him look seven feet tall as he parted through the crowd with politeness.

The stranger caught the bar stool next to the man. He ordered a virgin Mojito, which he referred to as a “Nojito” and sat down placing a pair of brown leather driving gloves next to his keys. The ring of keys showed the man what the pop-up headlight belonged to. A Porsche. Probably a 930 flatnose like the kind he had seen in Car and Driver magazine. The man wasn’t a car guy but he appreciated a fine machine when he saw one. Admired them as much as the next average guy who watches sports on weekends.

He watched as Perry brought the stranger his drink. The man estimated the stranger’s age at about a decade to his own with a Texas Ranger mustache covering his upper lip. The stranger tipped him handsomely before bringing the drink up to his mouth. “Ah! The first sip is always magical” He said out loud before turning to the man and raised his glass at him. “Salud” he said. The man gave a half smile and raised his glass as well.

A cocktail of boredom and curiosity inebriated the man enough to turn to the stranger and ask. “Are you a race car driver of some kind?” The stranger grinned in delight. “Nope. I wish.”

“I ask because your jacket is full of car badges.”

“You noticed, huh? Not every subtle I’m afraid.”

“So are you part of a motor club?”

“You could say that. They call us by different names: Scofflaws, degenerates, road rebels, a menace to society, dangerous. In the end, we’re just a bunch of cowboy speed freaks. Lead foots wearing steel toe boots.”

“I’m guessing that’s your red car outside, then? The one that sounds like God yawning?”

“Afraid not. Just passing through. Needed to stretch my legs and grab a drink.”

“Not much of a drink, though.” Said the man in a polite, but judgmental tone. The stranger chuckled.

“I know. But I gave up drinking for a month in order to be sharp. I’m on my way to Connecticut. Left El Paso this morning, but I wanted to wet my whistle before crossing state lines.” The stranger held his glass up to the bar light. “There is no booze in this drink, but it tastes like it does, and that’s all I need. The familiarity. Get me?”

The stranger was silent for a moment. Thinking carefully about the words he was going to say next. In the background the juke box had started playing Lost Highway by Hank Williams. “I love this song…” Said the stranger before raising his cowboy hat slightly to answer the man’s question.

“A horizontal Mount Everest. A cross country rally, you see. A high speed salute to manifest destiny. The U.S. Express.”

“In a way yes. You ever see the film Cannonball Run? With Burnt Reynolds?”

“Are you kidding? One of my favorites. I loved the way Reynolds slaps the shit out of DeLuise in the credits. Hilarious.”

“Yeah. Well, imagine that, but for real.”

“You mean. You’re a Cannonballer?” The man remembered reading about the cross country rallies that took place in the 70’s. He had no idea they were still going on. The stranger was quick to shush him.

“Keep it down. I don’t want noisy peckerheads getting any ideas about looking at my car.”

“Nope. It’s actually a money pit with the risk of jail and death thrown in for good measure. A middle finger to everything decent and normal.”

Again, the stranger fell silent. Taking big gulps from his drink while thinking.

“Why do some men fly all the way to Africa just to shoot a lion? Why to others climb mountains or dive to the depths of the ocean? For the rush, the high of overcoming a challenge. A flavored adrenaline that carters to only the ones with the stones to do it. This rally is one of those rare events that spark fantasies. Many can dream about it but only few ever dare it. Because it’s crazy in the eyes of common sense. And about as legal as a hooker’s bra stuffed with cocaine.”

“How did you get involved?”

“Got lucky picking the right people as friends. This time next week I’ll be in California, hopefully.”

“You’re damn straight it is. But it’s nothing new. This whole thing was set in motion, no pun intended, back in the 1920’s when Erwin Baker rode his motorcycle from New York to LA in six days. They called him Cannonball, hence the name. But Brock Yates is the one who pioneered the idea to turn this challenge into an event.”

“I remember reading about him in the 70’s. He set the record right?”

“Yeah. I’m a big fan. Reading his stuff got me into the cars in the first place.”

“I see. But do you guys really going all out? I mean. Flat out on public highways?”

“Bet your ass. I got that Porsche outside souped like clam chowder. Has enough power to make a Porsche 959 sweat. It’s loaded with everything I need. CB, police scanner, radar detectors, endurance fuel tank, and a switch to turn off brake lights. That overpriced VW is ready to rock!”

The man was impressed with this middle aged cowboy. He admired his sense of freedom. “Wow. Well, I wish you luck.” He said, extending his hand. The stranger wasted no time in grabbing his hand firmly for a hearty shake.

“Thanks. They say this will be the last year the race is held. It gets tougher every time. Technology is something none of us can outrun, you know. I figured I better do this before it becomes just something you read about in history books.”

The stranger finished his drink in one last big gulp and let the glass drop on the bar with the weight of his hand.

“Well, I gotta go. Need to keep time you know. It was nice chatting with you, friend.”

“You mean over!” The stranger replied, laughing as he walked back into the crowd towards the door.

The man sat at the bar pondering on the idea. The idea of driving across the United States, flat out. Sea to shining sea, as fast as possible while avoiding being thrown in jail. A race where every driver on the grid is going wheel-to-wheel against the ultimate rival, the clock. His thought process was interrupted by the red Porsche starting up and revving up a storm before driving out of the parking lot leaving a trailing exhaust note.

The man reached for his drink and finished it in one gulp. He began to think about the old blue ’69 Hemi Charger Daytona that belong to his friend’s father. Sitting in the garage collecting dust after being parked there in ‘77. “That car could do 200 mph in its heyday. Bet it could do it again with some tinkering.” The man sat there pondering. “It won’t be the last one. Cars are getting faster. Naturally a few crazy fools will want to see how fast they can go… I could do this. Not in the race. On my own. It’s better than wasting my life in an office. Besides, if I wreck and die she won’t get anymore alimony out of me.” The man grinned ear to ear before ordering another drink. He made a mental note to call his friend tomorrow afternoon to see if the Daytona would be for sale. After all, no state in the union has the death penalty for speeding.

One thought on “The CannonBaller”