A lot of things. It’s the capital of the state of Nuevo Leon. Home to many historic landmarks. It’s the city where my father studied engineering when he was my age, and my god parents live there.

Monterrey a city of hustlers, and I mean that as a complement to the people of this city. Every one there works hard to earn their day’s pay. Doesn’t matter the job. The city is one of the largest in Mexico and the rules of the road could make Mad Max sweat. The people drive fast and loose like moonshine runners trying to stay one step ahead of Johnny Law. I challenge anyone who fancy themselves as a “great driver” to tackle the daily commutes in Monterrey. It’s the only place I’ve been to where I’ am forced to run stop signs and see a city bus dive across three lanes of traffic to make a stop. Incredible stuff for a driving junkie like myself.

Why was I here? To pickup car parts. We had dropped off the front & rear bumpers, and grille for my 1970 Monte Carlo SS to be restored and chromed. (side note, the job cost me a fraction of a fraction of what I was quoted in the US and they shine like diamonds.)

We were also on the hunt for parts for Volkswagen Beetles. The VW Guru, Jesus Chema, was working on our ’95 Bug and we just purchased another ’70 as a potential quick flip. We needed parts: clutch cables, engines, transmissions, seats, headlights, etc. The works! While still on a tight budget. We’re car hobbyist, not Gas Monkey. We don’t have a millionaire best friend and a beer sponsor to fund our projects.

What I love most about Monterrey, apart from the Fury Road driving, is the car spotting. You see everything from the latest super cars to drivable junk that would make the guys from Roadkill think twice about buying. All running side by side on the fast freeways of the city. I had a blast riding in the back seat with my phone at the ready to snap a photo of something cool on wheels. Like being on a gasoline safari

When I was younger the city was flooded with VW Beetles and Buses. Bugs to Monterrey were like bicycles in Portland. The old saying used to be that you either owned a car or you owned a “Bocho”. Since the final Beetle was manufactured in 2003 the days of seeing five Beetles for every one car or truck has flipped. Now, Beetles are becoming more of a sighting than a background. Seeing them out in the wild, in any condition, is a treat.

What Would Happen if Chop Shops Opened for Business?

If you need parts on the cheap there is a street in Monterrey that can provide you with almost anything you need. The place is called Pablo De La Garza, which is the name of the street. Like a red light district for car parts. Blocks of wall to wall car shops, garages, and part stores. Need a front grille for a 2007 Dodge Nitro? No problem. Missing a taillight for a 1998 Buick Century? They got you, too.

The chrome shop we went to was heavily secured. The steel curtain opened up to a concrete wall with a steel door and a bullet proof looking side widow. You walk up to the window and a little old lady would greet you. Slide your order receipt under the window and wait for her to open the door. The shop behind the wall was filled with bumpers with the equipment for chroming at the very end. Not that I could see anything. Once I found out that this was a strictly cash only business, the five security cameras around me made more sense. A Fort Knox for chrome.

We picked up the neatly wrapped chrome bumpers and then walked next door to a Volkswagen parts shop. They didn’t have specifically what we needed so the owner sent us to another shop two blocks down. It’s that easy. 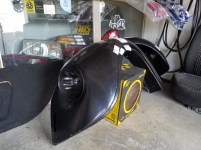 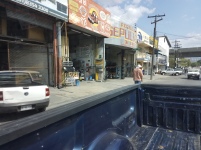 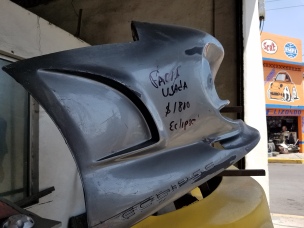 The whole scene can look a little shady to an outsider. It looks as if chop shops decided to go legit with their stolen inventory. And people finding parts that were stolen off their own car is rare, but not unheard of. But don’t let that discourage you. It’s a hellva place to visit if you need parts for your Volkswagen, enjoy hunting for car parts, or just a car person who happens to be in the area. Everyone is in a hurry and everyone is carrying parts. It’s quite a show and cash is a universal language.

3 thoughts on “Monterrey, Mexico – The City of Car Parts”