I was in Oregon last month to partake in a road rally called the Gambler 500 (a story you can check out here). One of the motto’s on the rally was “If you ain’t having fun, go find some.” My teammates and I had been on the road for about 7 hours, heading towards the overnight checkpoint, when we spotted a sign for a vintage aircraft museum. Jeremy, who was driving at the time, decided to stop and stretch our legs while checking out some cool planes. “Why not?” We thought. I’m glad we did, because we ended up finding a hole in the wall  with some truly impressive military warbirds, the Erickson Aircraft Collection.

Before I get to the museum I need to set up the vibe. When I was in grade school I would watch Cartoon Network with my little brother. There used to be a show on called Toon Heads. It was a 30 minute show that aired classic cartoons like Droopy Dog, Screwy Squirrel, Looney Tunes and others.

Each episode had a theme and aired cartoons relating to that theme. What was interesting about the show is that before airing the cartoon they would give you some “Toon Heads Trivia” about the cartoons. This included facts about the animators and production of the cartoons. Stuff kids wouldn’t be interested in, so looking back I wonder why they bothered but I’m grateful they did. Could have been what sparked my interest in history later on in life.

Anyway, one time they aired a cartoon by Tex Avery (creator of Droopy Dog, Wolf, Little Red) called Little Johnny Jet, from 1953. The cartoon was about a veteran B-29 war plane struggling to find work after the military because now everyone wants jet planes. Then he has a son and little Johnny turns out to be a baby jet plane (adorable). Desperate to earn a living, John B-29 enters a race around the world for a big military contract against much younger jet planes. Little Johnny saves his father when his engines give out and pushes him to victory. Great cartoon, but there is a scene that has haunted me ever since.

Before John B-29 goes to enter the race he sees one of his superior officers in a hanger. John asks the plane, “Good morning sir, flying today?” The plane’s responds, “No. Old planes never fly, they just fade away…” And you see him vanish into thin air. Then it cuts to the next scene. That is a heavy sentiment for a kid’s cartoon. I was probably 8 or 9 years old and thought that scene was incredibly sad. That scene was imprinted in my memory and I can’t reflect on it without thinking about the boneyard in Arizona that is filled with retired warbirds collecting dust and getting sun tans. It’s one of those sentences that can keep someone in deep thought for quite a while.

When we walked into the museum the woman behind the counter, Holly, told us that she was about to close for the day. We mentioned that we was part of the rally and told us that we could look around for 20 minutes while she cleaned up. She also informed us that all the planes in the hanger were operational. World War II war birds resting comfortably in an AC hanger surrounded by memorabilia while listening to the greatest hits form the 1940’s. Oil sheets were placed under all the planes to collect drops of oil from their engines which I found endearing. 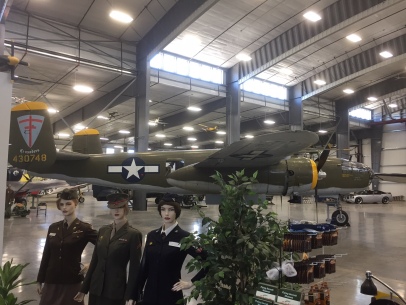 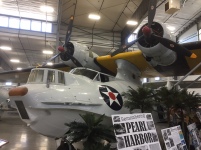 Having the hanger all to ourselves meant it was dead quiet expect for the music. All the planes sitting like statues, beautifully restored and at peace. We even saw a pair of Willy’s Jeeps, one that belonged to the Air Force and a rare blue Willy’s that was used in the Navy. They even had a German Messerschmitt BF-109, a fighter plane used by the Luftwaffe during WWII and kept in production by the Spanish after the war. 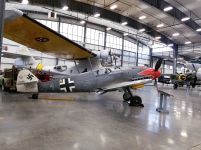 Across from the Me 109 was a Curtiss P-40E Kittyhawk. A fighter plane most famously known for being the warbird of choice for the Flying Tigers of WWII. The Flying Tigers were the first American Volunteer Group (AVG) of the Chinese Air Force. Pilots from the US Army Air Corps,  Navy, and Marines were recruited to be official members of the Chinese Air Force and partake in theater over the Pacific after Pearl Harbor in 1941. The Flying Tigers lasted until 1942 before being disbanded, but are accredited for destroying 296 enemy aircrafts while losing just 14 of their own. Even the most uninformed people can recognized the famous shark mouth design on these P-40s. Next time you see a car being wrapped with this design know where it came from. 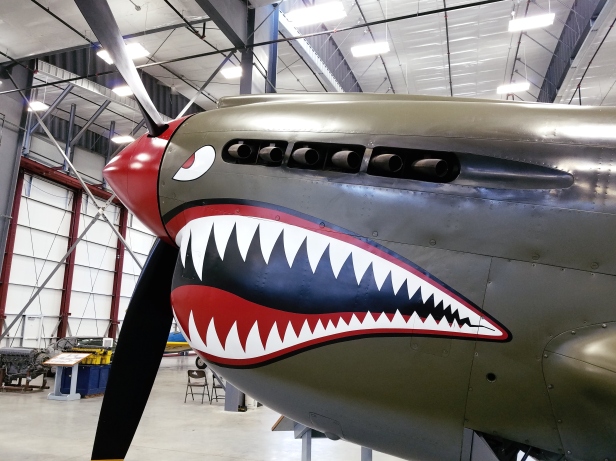 Another cool piece included a Rolls Royce Griffon Mk-58 engine, a direct descendant of the Rolls Royce Merlin engine. These were used to power the British Royal Air Force’s Super marine warplane, the Spitfire. As well as the Seafire and Avro Shackleton. This massive V12 has a displacement of 2,240 cubic inches and made 2,455 horsepower in its heyday. A real hotrod aviator of an engine.

We left the museum with huge smiles and a warm feeling of nostalgia. Not because we are patriotic, or history buffs, (we are) but because we were happy that these old warbirds were not going to just fade away into the past. They’ll be around, ready to fly if needed, for decades to come thanks to devoted collectors and restoration groups. All the vehicles and aircraft at the museum belong to a single private collection. 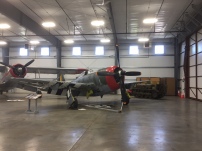 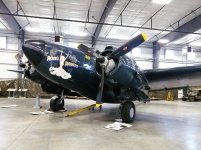 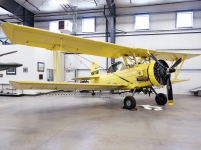 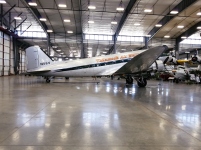 Why Knowing About the Past is Vital for the Future

In school, I remember classmates complaining about how boring history was. They all used the same line, “It already happened, who cares?” Being a hot head that line always infuriated me. Its such an ignorant, horse shit, line (Pardon my language). I love history because its a list of the human race’s greatest mistakes and accomplishments. History tends to repeat itself because we failed to learn to the lesson the first time.

That’s the bottom line to why history is so important,because we learn from it. Each of us has a personal history of mistakes that we learn from (or don’t depending on the situation) so we know better next time. Flipping through the news channels in 2017 it is easy to see that we live in an era where information is literally in the palms of our hands yet we live voluntarily uninformed or involuntarily misinformed. Like the old saying goes, “Man is the only animal that will trip over the same stone twice.”