I’ve only been writing for a few years, but I wouldn’t be as far into my career if certain people didn’t help me along the way. Editors who took a chance on a young kid who wanted to write about cars. Now I have a chance to pay it forward by helping Ian Fitzpatrick. An international friend, and petrol-head, from Ireland who, like me, decided to put off having a real job to write about cars instead. This is his piece on the culture shock of coming to America for the first time to work as an automotive journalist. Big roads, cheap gas, and V8’s aplenty in Yankee land.

You can also checkout Ian’s work at Driver’s Nation.

Most of you are used to seeing Jesus write words for your reading pleasure but today, whether you like it or not, you are going to read a piece by me, Ian Fitzpatrick. I’m a motoring journalist from Dublin, Ireland. But before I could officially call myself a full time journo, I was a student. I just graduated from college with a degree in logistics. Knowing that I did not want to face the big bad world yet; I applied for a visa, spent all my savings on an insanely expensive plane ticket and made my way to the USA for the Summer.

Fast forward two months later and I am now well settled into Chicago, Illinois. In this time, I have adjusted to the upscale city life. For those of you who have not been to Dublin, it is a small city with just three main shopping streets in the city center. The whole county of Dublin, is probably the same size as city of Chicago. So you can understand if I was a bit flustered upon arrival.

Adjusting to the Big City Life

Having learned to drive on the “wrong side” of the road, by that I mean driving right hand drive, getting used to left hand drive took some time. My first presser (media car) in the States was a Mazda3 manual, which I thought was odd, but I will come back to that. The week before, I had a Chrysler 300c so going from one extreme to the other was interesting. However, getting to know the road rules was where I took the most time to adjust. Being able to turn right on red while pedestrians have the right to walk; bizarre! Yet it makes sense because Chicago is such a large city and more likely to become congested with traffic. Little old Dublin is no comparison therefore no need for such a rule. 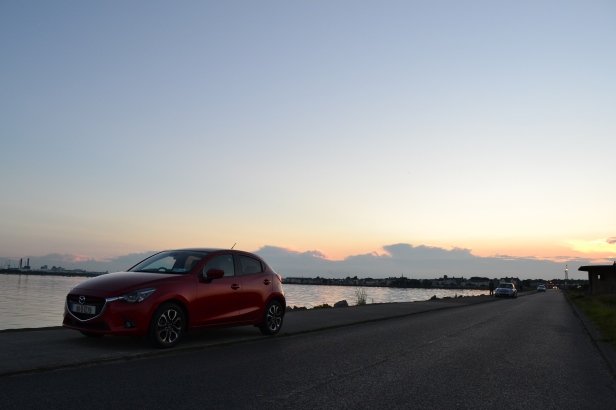 Saving the Manuals & V8 Rumble in the Background

Before arriving in America, I assumed that everything was automatic. Manual transmissions, as far as I can tell, are seen as a retro trend. If you know how to use “a stick” its almost seen as cool here in the states. The same goes for the shift from V8s to more eco-friendly and fuel efficient engines. At first, my head turned at every V8 that passed. This can get rather tiring once you discover that almost every pick-up and pre-2000 car is more than likely singing a V8 rumble. However, it’s reassuring to know that people care enough to still run these fuel thirsty beasts.

Fuel Prices – You Have it Lucky

That brings me to fuel prices. Fuel in Ireland is a huge concern at the moment. We pay by the liter and it works out at roughly €1.31, as of 22nd July. While here in Chicago, you paid by the gallon. As of today, the local BP station showed $2.99. After doing some quick, rather “complicated” math, this works out to be roughly €4.98 per gallon in Ireland, or $1.27 per liter in the US. In other words, you guys have it good! I put $13 worth of petrol in the Mazda3 and it got me from almost empty to three quarters. That would be every enthusiasts dream back home.

My Kingdom for a Country Road

But, there is one thing that I am missing and that I have yet to find. That is a quiet, twisty and winding road. Every road here is too wide and straight. The closest I’ve come to a good road is near Lake Geneva, Wisconsin. Unfortunately, when I trekked up to Lake Geneva I had the 300c so it was wasted in that land yacht. I have an MX5 on test next week and I don’t want it to go to waste so I’ve taken to the interweb and they have told me that Galena, IL is the way to go. Maybe some readers can suggest some good roads within driving distance of Chicago? Although, I’m partial to a decent road trip.

Take Me Home, Where the Grass is Literally Greener

If this is what homesick is well then that’s what I am. I miss the Irish narrow country lanes, the windy mountain passes and scenic coastal roads. I miss my manual R53 MINI Cooper S. Well, I actually miss the full time use of a car. I’m dying here! It’s tough being a car enthusiast and being away from your own set of wheels. Anyway, I highly recommend coming to Ireland even if the only thing we have going for us is our roads.