The new ad for the 2017 Kia Soul Turbo, in case you missed it, opens with a hospital delivery room. A baby hamster named Turbo is making a jailbreak escape set to the tune of Ace of Spades by Motörhead. Turbo ends his escape with a Mission Impossible move by jumping off the roof of the hospital only to parachute down into the panoramic sunroof of a normal Kia Soul driven by the hip-hop hamsters were all familiar with. The second Turbo lands inside the car, the Soul goes into warp speed and zooms away. Get it? Turbo, speed, cute car, marketing! Now I had a chance to see if Kia’s boxy crossover could dance as well as it looked.

Ad for the 2017 Kia Soul Turbo, featuring Turbo the Hamster.

The Kia Soul has come a long way since it first debuted with bug eye headlamps and being seen as a Scion XB knockoff. Mostly because it’s still around while the XB has been banished into the darkness of dead auto companies. This latest generation has sharper body lines to give it a more streamline look while still retaining its boxy design that buyers love because it offers head room, interior space, and it’s easy to get in and out of. (Like hoping off a bar stool.) 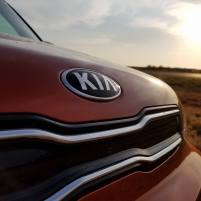 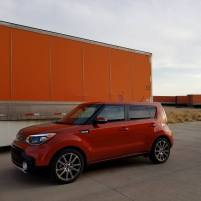 Since this model is meant to be a sportier version from a base model, the 2017 Kia Soul Turbo offers some styling cues to separate from the lineup. A red, go-fast, stripe dressed along the profile of the car. A red SOUL badge to show that this car is hotter than usual. And a shiny, duel exhaust tip to give it a sporty hatchback look. Wider wheels and tires are also clues that this is a Kia Soul that’s had some work done from the factory. This model shown was sporting a color that Kia calls Wild Orange, and looks like a saturated copper which makes it stand out in both night and daylight. 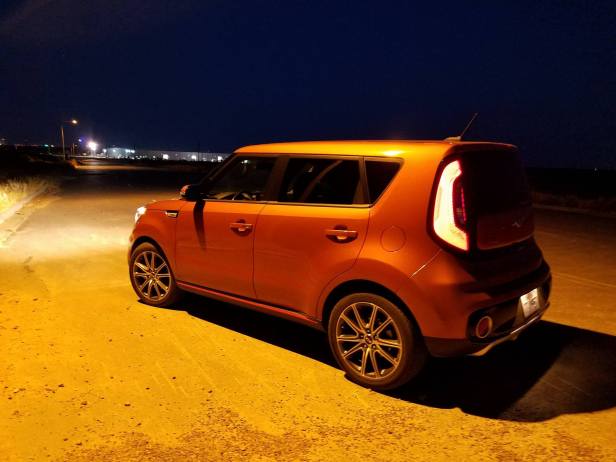 In keeping with the sporty nature of the car, the Kia Soul Turbo offers orange stitching on the leather steering wheel and seats. A funky pattern on the seats helps to add a splash of color to the black interior. Even the gear knob has been fitted with a hint of orange. All the materials in the Soul Turbo feel well made in terms of quality. The infotainment system on Kia’s have been my favorite in recent years for one simple reason, buttons! The 7 inch screen has clearly marked buttons on each side which allows the driver to navigate without having to look down or mess with a numb feeling touch screen.

What makes this little box perform is a 1.6 liter, turbo charged, four cylinder engine that cranks out 201 horsepower and 195 lb-ft of torque. If you switch the traction control off you can get the Soul Turbo to lay down rubber, briefly. What controls this hot little engine is a 7-speed, duel clutch, automatic transmission. You get three driver modes with the Soul Turbo: ECO, NORMAL, and SPORT. Switching between them while driving allows you to feel the Soul twitch to adjust itself into each mode. 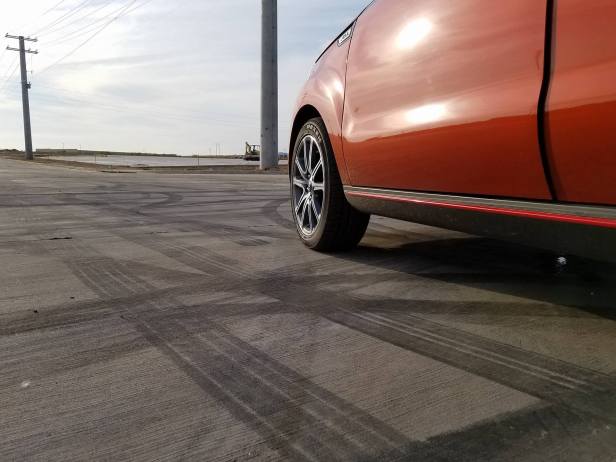 Sport mode makes the steering heavier and stiffens itself while stretching out each gear to keep you at maximum power longer. Eco mode is the opposite by being softer and changes gears quicker to keep the RPM’s low to make it more frugal when it comes to gas mileage. Normal, is a compromise between both ends of the spectrum.

Even though it lacks the correct shape for fun driving, the Kia Soul Turbo is capable of handling a turn. However, don’t get carried away because it can and will understeer if you decided to play chicken with the laws of physics. A big yellow sticker on the sun vision warning you against abrupt, high speed, maneuvers is a constant reminder that you are not in a low-center of gravity sporty hatchback. Even if it does sound and feel like one. 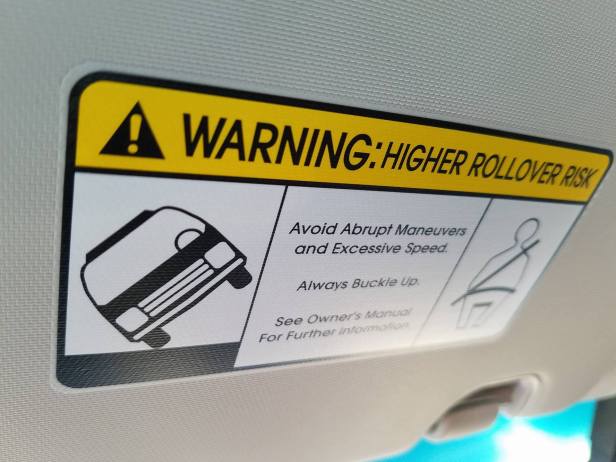 You can’t have a sporty version of an economy car without having some drawbacks. For instance, the design of the Kia Soul Turbo means that it is not very aerodynamic so on highway you do hear a lot of wind noise coming from the front side windows. The sporty 18 inch wheels and wide tires also means the ride quality isn’t as plush as you would imagine. I wouldn’t hold a glass of water while driving over rough road in the Kia Soul Turbo, unless you want wet pants. As far as standard options on the 2017 Kia Soul Turbo you don’t get much. No ventilated seats, no rear collision warning, no blind spot detectors, and no panoramic sunroof. Those are all options.

Kia states that the Soul Turbo can achieve 26 mpg in the city and 31 on highway. During my week with the Soul Turbo, that included a 300 mile trip, I averaged 25 mpg. Which is not great, but this is a sporty vehicle that offers a lot of space for its size. One of the biggest selling points for the Kia Soul Turbo is price. The model shown had a retail price of $23,620, which is not bad considering you are getting a 200 hp turbo charged engine, 7-speeds, and cargo space in the back.

Remember the techno hit The Hamster Dance from nearly 20 years ago? The Kia Soul Turbo is the embodiment of that song. You can try to hate it but you’ll foot will always tab along. This boxy little car with “over” 200 horsepower can be exactly what you want if you need a machine that delivers space and thrills. So long as you don’t try to drift it or you’ll quickly find how easily the Soul Turbo can imitate a rock skipped over a pond, sideways.

The ride may be a little too uncomfortable for buyers who want comfort over speed, but the Kia Soul is offered in a wide variety of options to fit their needs. If you want a hip looking crossover with enough muscle to leave tire marks and make people double-take when you pass them in the fast lane, the 2017 Kia Soul Turbo is worthy of a test drive.