I was invented to Toyota’s Motor Manufacturing (TMMTX) plant in San Antonio, Texas to attend the award ceremony of the 2018 Mid-size Truck of Texas the Toyota Tacoma. This was the third consecutive year Texas Auto Writer’s Association voted the Toyota Tacoma mid-size truck of Texas at the annual Texas Truck Rodeo.

After the award ceremony I was given a special detailed tour of their assembly plant and I have to say it was a mind blowing experience.

The plant is a few miles south of San Antonio, and it needs to be since the building itself takes up ¼ mile of land. It houses over 7,000 employees who assemble and build Toyota Tacoma and Tundra trucks. In order to walk on to the assembly line I needed to dress accordingly:

Up until then I had never been inside an automotive assembly plant. All my images of assembly plants were grossly outdated references from movies of the last century. A single file line of cars moving on a conveyer belt slowly being put together.

Walking on to the floor of this massive building the first thing they tell you is to Stop, Look, and Point. This building has streets with intersections where one has to stop, look in all directions, and point in the direction they are going to signal Tuggers that are zooming by. Here, vehicles have the right away. 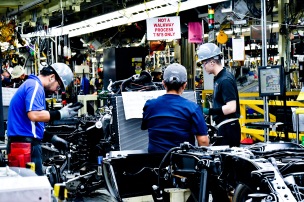 Tuggers are electric buggies that tow carts filled with anything you may find on a Toyota truck. These machines can run up to 100 miles a day. That may seem like a lot, until you find out that this plant cranks out a brand new Tacoma or Tundra every 60 seconds! A 1,000 trucks a day, and they’ve been in overtime since 2012. Would you believe that they still struggle to meet demand?

I got to see the assembly plant in action. First thing I noticed was the randomness on the line. Tundras and Tacomas are built on the same line in no particular order. Each truck that is built has been ordered, either by a customer or dealer, and is built according to the order. That means you see a Cavalry blue Tacoma TDR Pro being assembled behind a base model white Tundra.

While on the tour I learned that each new hire employee is required to spend two hours a day at the gym, which is located inside the assembly plant. Each employee is trained in the proper exercises that will help them on the line. This is to prevent injury and promote healthy work habits. The gym is always opened to employees to use it whenever they can. 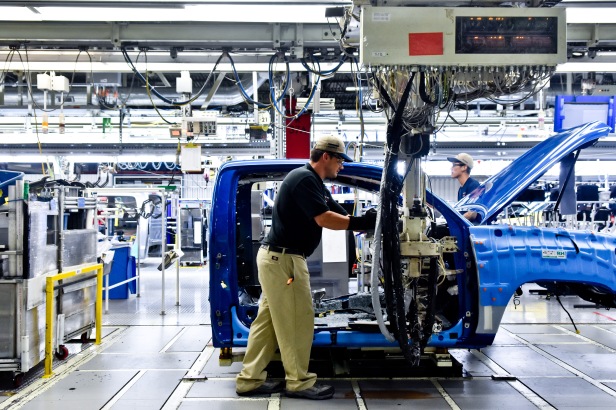 The TMMTX is a paradise for anyone who enjoys organization. Everything is clean, runs like clockwork, and has no smell. Autonomous robots run along a magnetic path carrying and unloaded parts for team members on the line. Reminded me of the movie WALL-E.

The work day isn’t what one would expect either. Team members work in 2 hour periods followed by a break or lunch. If a team member falls behind for whatever reason they pull on a white cord that goes along the entire assembly line. It sounds an alarm to alert a team leader to go over and assist in whatever is needed to get back on track.

Even the alarm wasn’t what I expect. It’s not a loud booming steam whistle, or siren, it’s actually a soft jungle that reminded me of an ice cream truck driving down a quiet neighborhood. 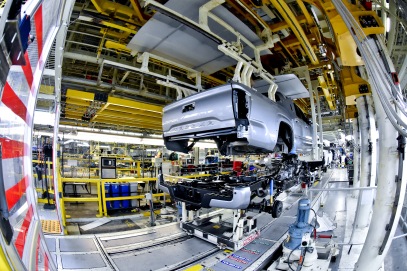 At the end of the tour I got to see a brand new Toyota Tundra being started for the very first time. I’ve been around new cars a lot, but never one with zero miles on the odometer. New car smell doesn’t get fresher than that. 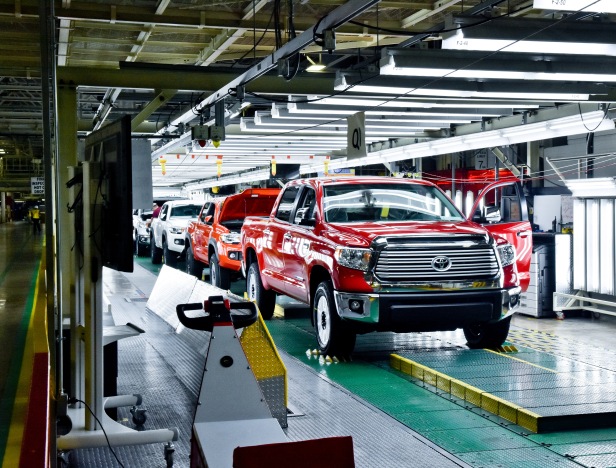 All the images were provided by Toyota since I was not allowed to take photos on the tour. One, for safety, and two because they didn’t want me accidently giving away trade secrets on how they do things. Understandable.

I thoroughly enjoyed seeing how these trucks are built. I look at them a little different, and certainly see the Born In Texas, Built By Texans decal in a whole new light.