My First Civic SI and It Doesn’t Have a VTEC

I had a personal vendetta with the Honda Civic when I was young(er) and dumb(er). In high school all the car enthusiasts had to pick a team. Muscle vs. tuner, and all the “ricers” that fell into each side of the debate. I was a V8 guy and a lot of my friends were VTEC owners so the debates were as heated as the comment feed on a Facebook political post.

Things have changed since then and I no longer feel an urge to rev a V8 at anything with a blow-off valve. Now I had a chance to see how much I’ve matured by reviewing the 2017 Honda Civic SI. To find out if I could approach this vehicle in an unbiased manner without letting old habits rise up from the grave.

Jumping into the 2017 Honda Civic SI after spending two weeks in the Lexus RC F was interior culture shock. I had gotten used to being cradled in the Lexus’ sports car interior and having to fold my legs to avoid scratching the door panels. Stepping inside the Civic SI I felt smaller. Honda has been feeding the Civic in recent years and it’s grown to the size of an Accord. There is so much space inside this car that it reminded me of a mini-van where everything feels like it’s far away until you reach for it. 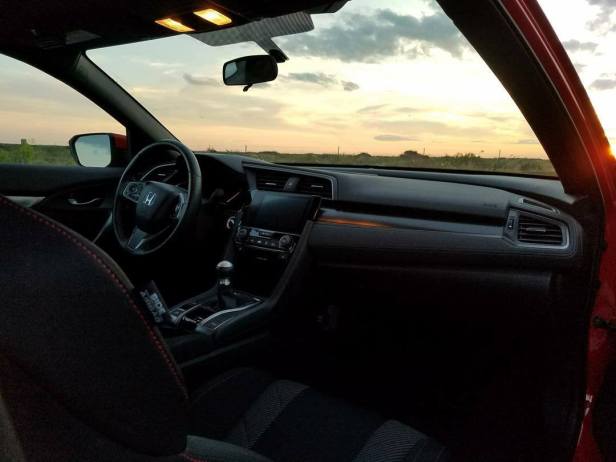 The biggest safety feature is Honda’s Lane Watch which is a blind spot camera. When you signal to make a right turn the dashboard will show you a camera view of the car’s blind spot in real time. A driver no longer has to turn their head to make sure the coast is clear before merging to the right. A button on the turn signal allows you switch it on at your own convenience. 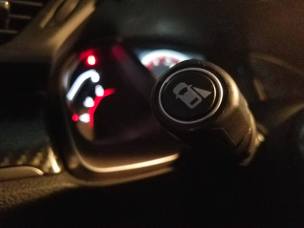 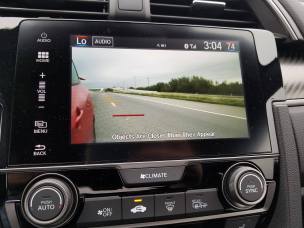 The SI trim bucket seats were wide but held you I place without feeling like you were being hugged. Rear seating allowed me to keep my hat on, but getting out from the back was tricky since one has to crawl under or jump over the front seat belt. 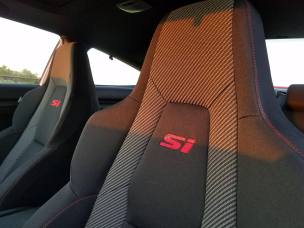 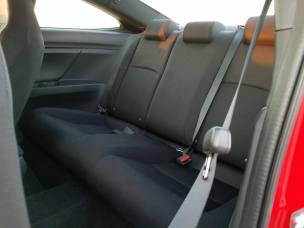 The model I was testing came equipped with a traditional 6-speed manual that was on the floor rather than on the dash. Center console included cup holders than could slid forward and backward with deep storage underneath. There was even a hidden compartment under the gear-shift where you could place an electronic device to charge with a 12 volt outlet and USB port. 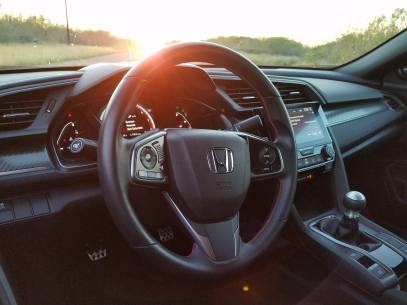 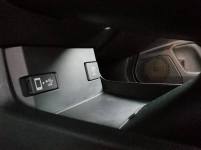 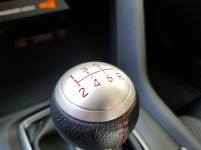 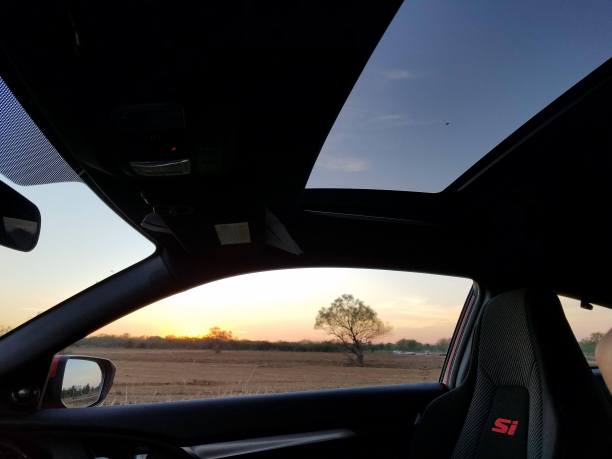 The infotainment system was easy to navigate on its 7 inch display, but I had issues with the layout. The dial closest to the driver is usually the one that controls the volume for the stereo, but not in the Civic Si.

The only two dials on the dash control the dual-climate temperature for both driver and passenger. A button labeled “climate” is used to control the fan speed. You press it and the touch screen will display the various fan speeds. It felt like a long way just to control something that could easily be done with a simple dial. 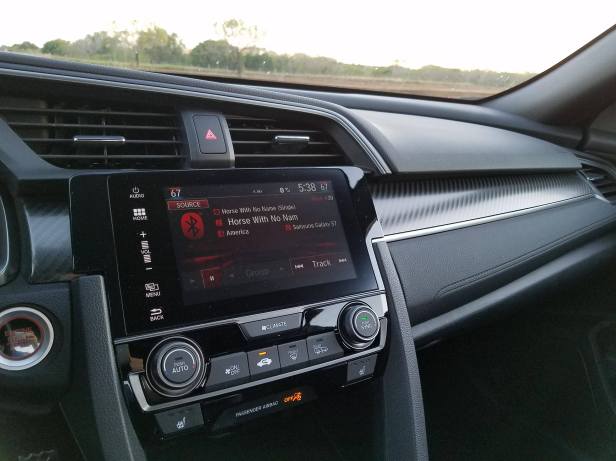 If you want to chance the volume you’ll have to press the left side of the screen. I lost count of the number of times I changed climate temperature rather than adjusting the volume. However, that is nothing compared to the biggest, and really only issue, with the 2017 Honda Civic SI… the parking brake.

Ask any automotive journalist, writer, or enthusiast, and they’ll all say the same thing, electric parking brakes, suck! Especially when fitted next to a traditional manual transmission. It’s like a chastity belt for driving. Sure you can have fun, but you can’t misbehave like one would hope to do in a sporty FWD, turbo charged, compact car with a big shiny wing on the back.

It may look like a hatchback, but it has a regular trunk lid. The Civic SI can be ordered in 4-door or 2-door coupe like the model shown here. You can choose from 6 different color options, including Rallye Red which looks gorgeous in any time of the day. 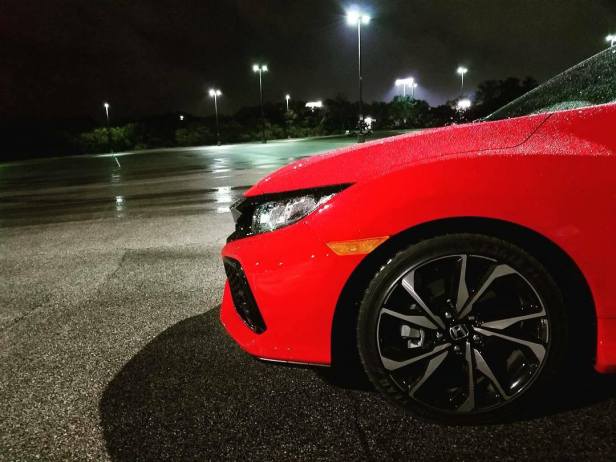 The profile is the Civic SI best side. It looks sharp with design lines that flow from the front to the large rear spoiler. It reminded me of an arrow head. The front end has a love it or hate it appearance thanks to Honda trying to make it look “menacing” (Their word, not mine) by giving it huge vents in the front of the car. They are large enough to look like this car came equipped with an aftermarket body kit straight from the factory. 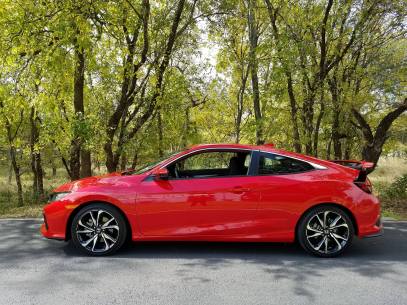 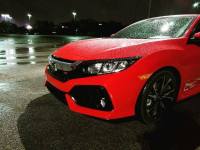 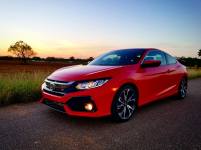 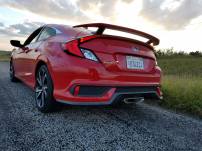 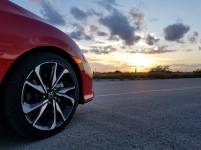 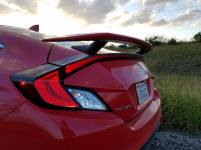 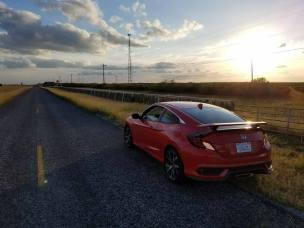 Performance and Specs on the 2017 Honda Civic SI

The Civic SI no longer preaches the gospel of VTEC under the hood. Instead, it now offers a 1.5 liter inline 4 cylinder engine. A turbo charger kicks up the performance to 205 horsepower and allows the 6-speed transmission to pull you along in every gear. On the highway I did not need to shift down into 4th in order to overtake a semi-truck. 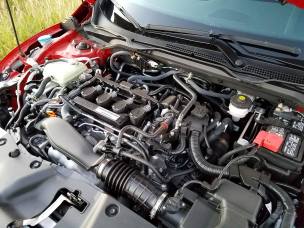 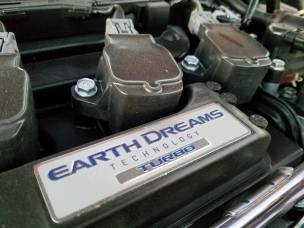 The Civic SI feels quicker than it reads on paper. Thanks to a limited slip differential, MacPherson struts, and adaptive damper suspension, you can push the Civic SI around corners without feeling like it’s going to understeer you off the road. The turbo charged engine offers plenty of get-up-and-go. I was able to hit highway speeds in 4th gear without putting my foot down.

In fact, I found that I could really throw this car around at speed before hearing the front tires squealing for mercy. Sport mode stiffens the suspension to encourage exhilarating driving and feel like a real hot-hatchback with its 6-speed transmission. 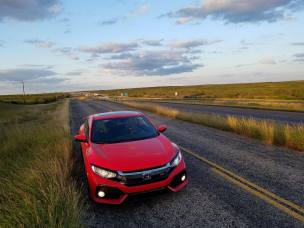 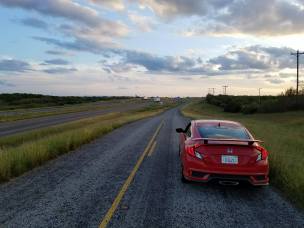 I averaged 33 mpg during my week with the Civic SI, with fuel economy being 28 mpg in the city and 38 on the highway. Pricing is very reasonable with starting MSRP at $24k, but it does not offer a lot of options which is why the model shown here had a price tag of $24,975.

If it wasn’t for the parking brake I would have said that I loved the 2017 Honda Civic SI. The car looks great, the trunk is massive, it’s quick, handles very well, and is good value for money. Plus, SI trim only offers a manual transmission, which is almost unheard of these days. Yet, I will stay up late at night wondering why Honda had to ruin the Civic SI with an electric parking brake that takes away one of the best reasons to own a car like this.

Being able to slide a car around using a handbrake, or foot brake, may be reckless, dangerous, and juvenile, but the Honda Civic SI has always been about youth and fun.A manual car with an electric parking brake is a driving oxymoron. 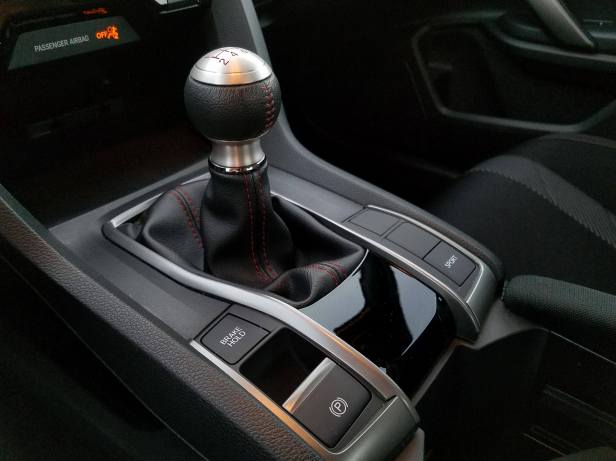 This 10th generation Civic SI reminds me of a young person who is transitioning into the responsibilities of adulthood. That point in someone life where they notice that hangovers that can’t be cured with a bottle of Gatorade, and stretching before physical activity is now mandatory.

I found myself feeling a sense of disappointment every time I looked down and saw the parking button. I call the 2017 Honda Civic SI the Millennial personified on wheels because this car is a constant reminder for anyone in the millennial generation that age is befalling us. The Civic SI looks young, performs with agility, but knows that it has to stop hooning around parking lots and revving past six thousand RPM’s. It needs to grow up and start behaving like its older siblings.

I don’t want a sports car to remind me that I need to start acting my own age. There are already plenty of vehicles on the market that can do that. 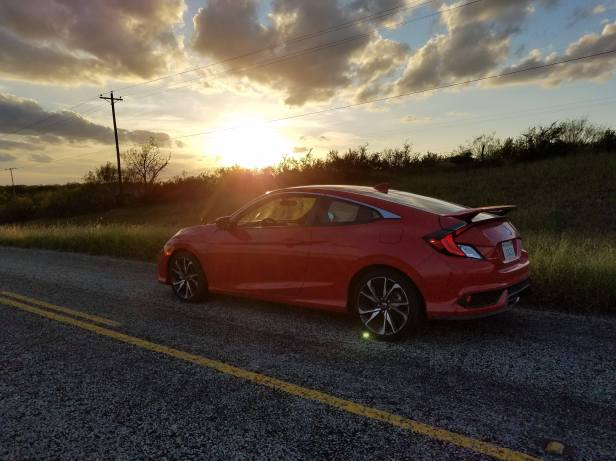