The Mint 400 is considered one of the biggest off-road races in the world, attracting drivers, teams, and spectators from around the world. Born from a publicity stunt and surviving a 20-year hiatus, the BF Goodrich Mint 400 turned 50 this year.

This motoring event became an immortal reference in pop culture amongst non-off-roading enthusiasts when it guest starred in Hunter S. Thompson’s Fear and Loathing in Las Vegas – and in the 1998 film adaptation.

“In some circles the Mint 400 is a far better thing than the Super Bowl, the Kentucky Derby, and the Lower Oakland Roller Derby Finals all rolled into one. This race attracts a very special breed.”

Las Vegas is no stranger to herds of people with shared interests invading their town for days on end. Conventions bring in everyone from adult film stars to Elvis impersonators, but even they can’t shut down Fremont Street like the Mint 400.

It all began on March 7th with a parade of off-road racers cruising down Las Vegas Blvd to reach Fremont. Dune buggies, trophy trucks, Baja Bugs, UTV’s, and vintage off-roaders were escorted by police for two days during safety tests and inspection. Several blocks of Fremont Street were littered with aftermarket vendors on either side putting up their booths.

By Friday the street was a controlled chaos of racers, media, tourists, and off-road vehicles trying to thread through the sun-tanned traffic to get to their team trailers. At the driver’s meeting the grand conference room at the Golden Nugget was completely full, with people squeezing in outside the door in attendance. With some 400 teams the Mint 400 became the largest off-road race in America! 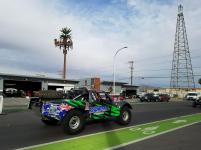 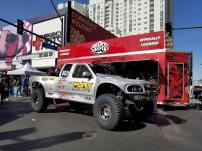 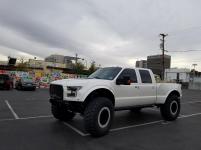 There is a certain unique energy at this event that separates it from the rest. It’s a race that behaves like a club meeting. Everyone is here to have fun and be a part of off-road racing. That’s the foundation for the Mint 400’s existence. A publicity stunt that made a lot of people say, “That looks like fun; that should be a thing.” 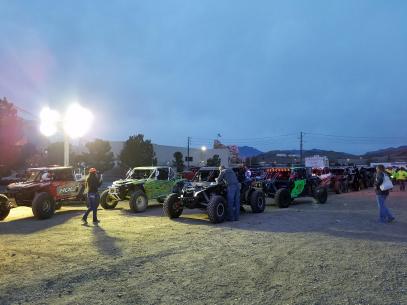 Not everyone here is a career veteran, and not every team is backed by a Fortune 500 company. It has this vibe that you only see in the suburbs – on television. You get the feeling that if you needed help, all you had to do was shout. Or that you could walk up to anyone and start talking about suspension components and swap driving stories.

Here, then, are the winners in their respective classes of the 2018 BF Goodrich Mint 400: 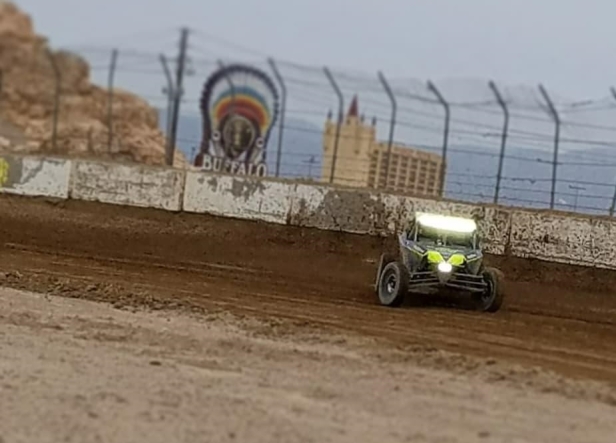 Trick Trucks
Bryce Menzies took 1st place in the 50th Mint 400 by just 28 seconds, finishing four laps of the 118-mile course in 5 hours 52 minutes, with an average speed of 60 mph over the toughest terrain Nevada has to offer. Following his first victory in 2013, Menzies has now joined a very select group of drivers who have won the Mint 400 more than once.

RPM Offroad’s Apdaly Lopez came in a close 2nd, after leading the final lap of the race. Bad luck set in at sunset, when the team’s light bar stopped working. No light bar meant they hit a rock and punctured a tire. Then, their air-jack decided to quit and had to use the mechanical jack. Losing minutes during the tire change cost them the lead.

1500 Class Buggy
In 1st place was Harley Letner. His speed on the course managed to beat all but seven Trick Trucks on top of his class competitors. Letner’s time was over an hour ahead of 2nd place winner Brian Parkhouse, with Sam Berri coming in 3rd place.

6100 Class (Low-budget Trick Trucks)
Bobby Pecoy started the race in 34th and finished in first – that gives you some idea of what had to be done in order to achieve victory. Terry Householder and Nick Mills joined the podium, respectfully.

4400 Class
Just a month after the King of Hammers race all 29 competitors were here at the Mint 400. Only thirteen of them managed to finish the race before the midnight cut-off. Paul Horsechef came in 1st place with a time of 8 hours 3 minutes. Casey Corrie came in 2nd followed by Loren Healy in 3rd.

1000 Buggy
Brock Heger took 1st with a time of 5 hours 53 minutes after driving through hell and back. An accidently run-in with a competitor sent the UTV into a roll during the second lap. The race car was drivable but damaged with radio communication and no brakes. Arnoldo Gutierrez took 2nd place and Christian Fessler in 3rd.

UTV Turbo
This is the largest class at the Mint 400 with 70 competitors. Justin Lambert took 1st place after fighting to the top from a 59th starting position. Phil Blurton followed in 2nd and Mark Burnett coming in 3rd.

Motorcycles Set to Return Next Year

In summary, the Mint 400 is the Wild West, but with the friendliest people you can ever meet. A media pass at the Mint 400 can give a VIP pass a nose bleed, as I’ve never been so close to a race in my life; if any closer to the action I would’ve have been wearing a helmet. I could see why getting a media pass requires more than just a LinkedIn account. This is no place for amateurs (except, of course, present company). The dangers are real.

I cannot wait to be back again next year, as the organizers have announced the return of motorcycles and quads for the 51st Mint 400.