The 50’s saw the battle of the fin, the 60’s witnessed the horsepower wars, and every decade since has seen a similar struggle over a particular breed of vehicle. Future automotive historians will look back at the 2010’s as the Clash of the Crossovers. No matter the flavor, there is a CUV on the market trying to fit your desired needs and wants. Small, big, sporty, third row, off-road, luxury or hybrid, crossovers are taking over.

The 2017 Lexus NX 300h is a CUV that combines various classes into one. It’s a luxury crossover that is also a hybrid with All-Wheel Drive as standard. I spent a week making multiple long distance drives and running errands around town during the peak of a South Texas winter to find out what kind of driver the NX 300h is best suited for.

Lexus interiors have been knocking it out of the park in recent years. The interior in the Lexus NX 300h is a pleasant place to be. The model tested was dressed in Crème NuLuxe leather with Dark Umber Trim. The luxury package (a $4,545 option) included electric heated/ventilated leather seats, rain-sensing wipers, moon-roof, and linear black shadow wood trim. The whole created a truly relaxing place to sit and watch miles go by. 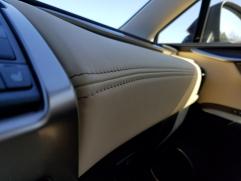 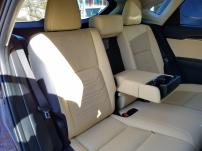 Of course, the infotainment could be improved by doing away with the touch-pad located in the center console. It is difficult to navigate while on the move and you need it to control most of the features. The dashboard looks futuristic with its array of buttons neatly organized under its 4.2 inch display screen; those buttons are mainly for climate control. Left of the steering wheel are a set of buttons that allow you to open and close the tailgate and fold the rear seats flat. 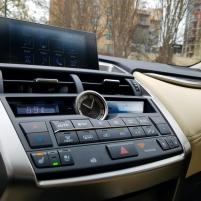 This model also came equipped with a QI-Compatible wireless charging pad. However, the charger is placed in the center console storage area. This creates an accessibility issue if you are charging your phone and need to get something, because you’ll have to lift the charge pad in order to access the storage area.

Funeral homes make more ruckus than the NX 300h does on the road. The loudest noise doesn’t even come from the engine; rather, it’s the ECVT transmission humming away without disrupting your train of thought. More than once I sat inside the NX 300h after I had arrived at my destination just to lounge around while I checked messages on my phone. If Lexus ever decides to manufacture office chairs I would definitely browse through their catalog.

The model tested in this review was dressed in Autumn Shimmer, a rich coffee brown that matched beautifully with the leaves of fall. The Lexus NX 300h offers an aggressively bold exterior, a spilt personality to its quiet, inviting, interior. One thing you notice is that the NX 300h doesn’t have a chin. 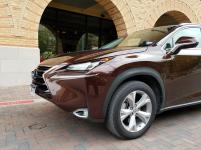 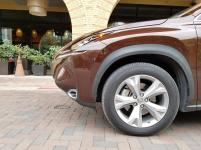 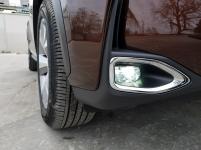 The wedge shaped front-end dips down at an angle and looks like a point in profile view. It is definitely different – at least visually – from any other luxury CUV on the market. For 2018, the Lexus NX 300h was given a mild face lift to give it a longer face, and those changes have improved the CUV by providing a more complete look.

The Lexus NX 300h is so quiet you might be able to fool friends into thinking its electric. Open the hood and you will find a 2.5 liter four next to the VVT-I battery, making a combined 194 horsepower. That doesn’t sound like a lot for a five passenger crossover and it’s not. The NX 300h will get you were you need to be, but don’t expect to be thrown back into its plush seats when you stab the go-pedal.

One thing I did like was that it does not feel top heavy through the turns at speed. It handles its weight very well for a CUV, steering is responsive, and the Dynamic All-Wheel Drive system keeps you safely on the road.

The NX 300h carries a 330-mile range on a full tank, and on paper it is capable of getting 33 mpg in the city and 30 mpg on highway, for an average of 31. But! During my time with the Lexus NX 300h I was nowhere near those numbers. I averaged 27 mpg over 900 miles, and that’s with featherweight toes on the gas pedal. I really tried to drive slowly and efficiently to try and get it into the 30’s with no luck. 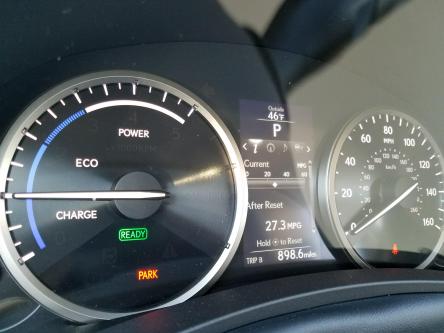 Averaging 27 mpg is not terrible for a luxury CUV that starts at $37k. However, when you consider that this test model costs $51,683 and sporting a Hybrid badge then one starts to reconsider the gasoline alternative.

I’ve owned mattresses that weren’t as comfortable as sitting in the Lexus NX 300h. Road rage was never an issue during my time in the NX 300h. It’s hard to get mad at traffic when you surrounded by crème leather and spa-like tranquility the moment you shut the door. For a luxury crossover the 2017 Lexus NX 300h is fantastic if what you want is a comfortable vehicle with a premium quality feel that doesn’t require you to step up or bend down to get in.

It does take time to get used to the control layout in the interior, and the gas mileage isn’t something to brag about for a hybrid vehicle. Nevertheless, the NX 300h is valid alternative for buyers who don’t want a large luxury SUV or low riding sedan, but still want the comfort of the former and handling (and footprint) of the latter. 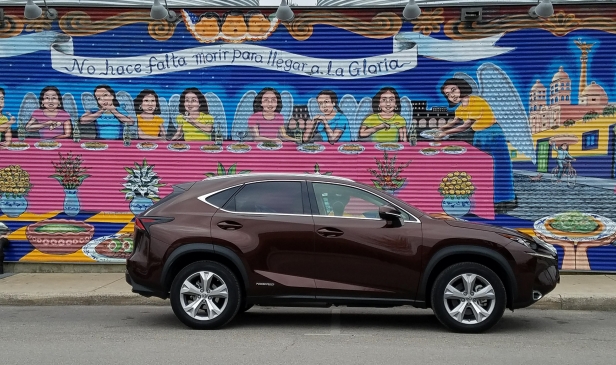