Earlier this month FCA announced the introduction of the 2018 Dodge Durango Special Service fleet vehicle. The Durango you’ll soon be seeing sporting push-bars, lights and sirens, and possibly in your rearview mirror in the not too distant future. Alongside the Dodge Charger, and Ram 1500, the 2018 Dodge Durango Pursuit vehicle will be joining the fleet of Mopar service vehicles currently on-duty in law enforcement.

Now, since this is dealing with police cars I promised myself I wouldn’t write any cliques. Absolutely no Blues Brothers references… Okay just one.

It’s Got a Cop Motor

The 2018 Dodge Durango Special Service will be able to tow up to 7,400 pounds so it will have Trailer Sway Control. The Durango is smart enough to notice if the trailer is swaying too much and will adjust throttle and brake pressure to keep it under control. This safety feature is also available on civilian Durango models. 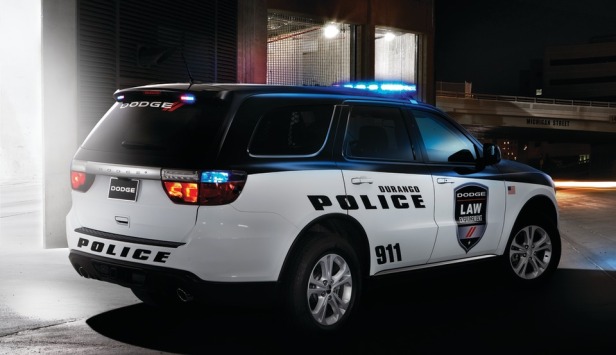 Heavy-duty four-wheel disc brakes with electronic stability control will be standard on the Durango. In order to cope with the potential high-speed maneuvers it may be asked to do while on duty. Ready Alert Braking is another safety feature that anticipates a situation where a driver will need to make an emergency stop.

It gets ready by setting the brake pad closer to the rotor to reduce pedal travel on the brake pedal for the driver. Basically, if the Durango suspects that it’s going to need to throw up the anchor in a hurry it gets ready and will go on full-stop without having to slam the brake pedal to the floor.

The 2018 Dodge Durango Special Service will even have a rear back-up camera. As well as rear parking assist. Make sense because vehicles in this line of work have a cage in the backseat and cargo storage in the rear that may affect rear visibility for the driver. Front ballistic door panels are also an option.

Expect the 2018 Dodge Durango Special Service to be hitting the streets soon. At a starting ESRP of $31k expect to see a lot of them if your local law enforcement like using Dodge Chargers. So be sure to take a second look if you see a dark Durango riding on steel wheels or sporting a shiny new push-bar up front.