All photos courtesy of GM Authority

The 2019 Chevrolet Blazer debuted last week, causing a Twitter-storm of mixed reviews. On one side you have those praising the new design, while traditionalists angrily typed their dislike for a beloved classic being morphed into a midrange crossover. It’s a reboot of a cult classic, and like the movies we’ll have to wait until it’s formally launched before we can really crack our fingers writing a review. In the meantime, here is what we know. 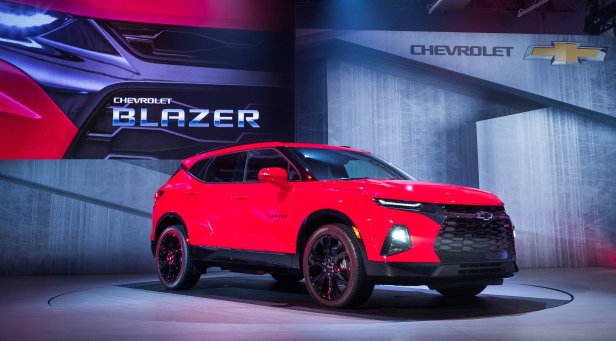 What We Know About the 2019 Chevy Blazer So Far

The Blazer will be built off a shared platform with the Chevy Traverse and Buick Enclave, and sold as a midrange CUV, slipping in between the Equinox and Traverse.

Expect to see the Blazer parked at dealerships in early 2019. Third row seating hasn’t been announced yet. Exterior was designed to be dynamic and aggressive, while its interior will have a sporty feel in keeping with the Blazer’s past. Trim options will offer the traditional L through LTZ spec, along with an RS and top-end Premier trim level.

New features include a lockable glove box big enough to store a handbag that will lock automatically when the vehicle is in valet mode, which is a first for a Chevrolet vehicle.  Hitch Guidance will also be available, which helps drivers when backing-up to a trailer hitch by showing the center line. The rear-view camera will also provide a top-down view to further help the driver line up the Blazer with a trailer without the need of a spotter. 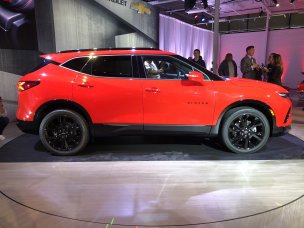 New tech intended to enhance passenger comforts includes Comfort-Open Windows, allowing the owner to roll down all the windows at the press of the key fob. This is to allow heat to escape before entering the vehicle – which will come in handy on camping trips or beach outings.

Two engine options will be available, and each will be matched with Chevrolet’s new 9-speed automatic transmission. Count on a 2.5 liter Ecotec four rated at 193 horsepower, as well as a 3.6 liter V6 with 305 horsepower. All Wheel-Drive will be an available option, and with Traction Select will allow the Blazer to switch to standard FWD when all-wheel drive is neither required or desired. Pricing hasn’t been announced, but GM Authority estimates it will start around $27K.

What About Fans of the Original Blazer?

The Chevrolet Blazer has always been a frame-on SUV, essentially a pickup with a closed bed built for off-road adventures, and squared off against the Ford Bronco and Jeep Wrangler. I sympathize with those who are angry that it is now a crossover, as I’m one of them. It seems to me – and them – that a Blazer crossover is redundant: Chevrolet already has the Trax, Equnoix and Traverse in its line-up. Why add another CUV?

Especially when they could have built the new Blazer off the Colorado and thrown in the fabulous 2.8 liter Duramax diesel with a 4×4 set-up. It would have put it up against the Toyota 4Runner, the newish Wrangler and newer Bronco.
.
The fact that the new Blazer borrows Camaro styling cues is also troubling. Sure, it might be viewed as looking cool – but crossovers are not seen as vehicles for enthusiasts. You don’t see them at the track, even though some are built for speed. You don’t see them off roading, even though some come with AWD. And you don’t see them being shown off at car shows, even though many are built by prestigious auto makers. The CUV’s natural territory is a parking lot. Most of the time, people who love crossovers are people who like vehicles, but don’t – notably – have a passion for them.

Seeing a CUV that bears the image of a sports car can produce in a paranoid mind nightmares of a future of nothing but variations of CUV’s crowding the urban and suburban landscape. The reboot is rarely as good as the original, no matter the source.