Spend enough time in the automotive community and you start to associate certain cars as the icons of certain clichés, lifestyles, jokes, or subcultures. For example, the 1963 Chevy Impala being imagined as a low rider. A black Dodge Charger. Patina on an old pickup truck. An 80’s Volvo 240 with a PETA bumper sticker. Pinstriped flame job down the sides of on a 1932 Model A with rumble seat. Or, a kustom 1949 Mercury Coupe with a roof chopped so low you’d think it was a modern Camaro. Customized Mercury Coupes are ionic with several movie examples lingering in pop culture. The master car builders at Icon Customs recently took a modern take on a 1949 Mercury Coupe by converting it into an electric vehicle powered by a 400HP Tesla battery pack.

Icon Customs is a niche company with a mainstream appeal in building fantasy inducing vehicles. They build six figure restomods that add new fire to old steel. Welding the designs of the past with turn-key reliability of the present.

Icon build an EV Mercury Coupe for a client whose identify wasn’t disclosed (for good reason). He/she wanted a classic patina covered lead sled with the instant torque of a Model S P100D. The results are beautiful. It looks like a weather worn classic with original looking interior. One wouldn’t know it was electric until it started rolling with its engine on mute. The Mercury has upgraded brakes and suspension to cope with the added power. Icon said that the Merc could have a range somewhere from 150-200 miles (Enough for a Sunday drive). It comes equipped with 2 charging plugs: one located under the front license plate, and another inside the now obsolete gas cap. 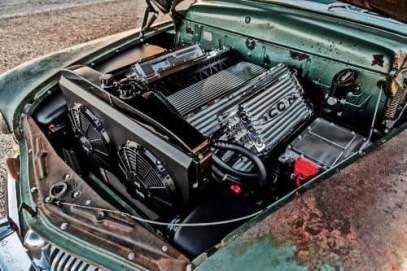 Electric Vehicles Are Not Romantic

A Merc with a Tesla mill. Cool? Most definitely. But will it become a trend in restomodding? Personally… I hope not.

The main turn off with EV’s is the lack of drama. There’s no romance with electric vehicles. They are the adult toys of the automotive world, but no matter how advance they may be they can never substitute good old fashion dirty oil burners. Instant torque is a unique experience but it will never be on the same pace as hearing an engine screaming up to high revs making your heart race. Listening to the idle waiting for the light to turn green. Speed without noise is food without smell. Whiskey with no burn.

Battery powered vehicles won’t be the savior many wish it will be because like oil they carry their own set of ethical, political, and environmental problems. A step in the right direction but we are nowhere near the finish line yet.
The 1949 Mercury Coupe will always be kool, and definitely beats staring at a Tesla Model 3 at a charging station.