Great classic movies can relate to the great books in that many say they want to experience them but just can’t seem to find the time. Well, if social distancing and self quarantine has given us anything it’s that.

Rather than sitting down to watch the entire series of The Office or Friends for the 14th time why not used this forced upon opportunity to do something you’ve always said you would wanted to do. Build a model airplane, write a novel, learn a new language, pickup yoga, or watch one of the great classic car movies of the 20th century. These are films you’ve most definitely heard of or seen on top 10 lists on social media. Now you are in a position to watch them thanks to a wide array of streaming services and in a heated battle against boredom and cabin fever. Here are 10 classic car movies you finally have time to watch.

“This fowl year of our lord, nineteen hundred and seventy one” saw three of the greatest road movies ever made. One of these movies starred James Taylor and Dennis Wilson, as two friends driving across the American Southwest in a 454 powered 1955 Chevy. They earn food and gas money by street racing locals wherever they stop while drifting aimlessly on America’s interstate system. A love triangle forms when they pick up a hippy girl hitchhiker (Laurie Bird).

A middle aged man in a 1970 Pontiac GTO Judge (Warren Oats) starts becoming a reoccurring sight during their travels. They finally meet face to face at a gas station they decide to race to Washington D.C. for pink slips. This is a critically acclaimed movie that’ll hit home not just with car enthusiasts but with anyone who feels aimless, with an internal yearning to disconnect from society and point their car at a horizon.

Trivia: The entire movie was film in chronological order, in just 8 weeks with a crew of only 30 people. Nobody wore makeup in the film either.

Vanishing Point is greatest of the 3 road movies released in 1971, and the greatest of all time in my opinion. It stars Barry Newman as Kowalski, a former racer, Vietnam War hero, and ex-cop who now works as a car delivery driver. His latest assignment is transporting a supercharged 1970 Dodge Challenger RT 440 from Denver to San Francisco.

He makes a bet with his friend/drug dealer that he can reach his destination in under 15 hours. A fist-full of west coast turnarounds (speed) keep his eyes on the road as he blazes a trail west. Guided by a blind radio jock named Super Soul (Cleavon Little) who has a seemingly spiritual psychic connection with Kowalski. Super Soul broadcasts Kowalski’s story making him go viral on the air waves.

The cops don’t know why he is running. Nobody knows why he doesn’t stop. This cult-classic creates die-hard fans (me included) not just because it’s one long car chase with a classic rock soundtrack, but because it’s a movie that speaks to many social issues and conflicts that can still be seen today. A visual representation that while we’ve come a long way it’s been without much change. Vanishing Point is the ultimate getaway road movie.

Trivia: The motorcycle cop that falls off his bike in the first car chase scene is Bill Hickman, the same stunt driver who drove the black 1968 Charger in Bullitt. 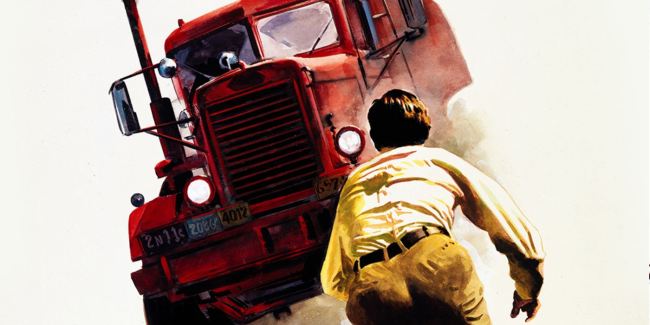 The last of the three great road movies made in 1971 is also the film Steven Spielberg cut his teeth with. Duel is Jaws on a highway. Instead of great white shark you have a greasy 1960 Peterbilt 281 tanker truck terrorizing a 9-5 everyman in a red 1970 Plymouth Valiant sedan. You never see the man behind the wheel of the Peterbilt, which was actually driven by the one of the greatest stunt drivers in history Carey Loftin.
You only his hands and boots of the manic trucker as he maneuvers his coal rolling beast in pursuit of Mr. David Mann (Dennis Weaver) just because he passed him on a two lane highway. A suspense thriller fueled by road rage. The entire movie was filmed in just 16 days, on location. What makes this movie worthy of your time is Spielberg perfectly capturing the sense of anxiety of having a large truck riding your bumper and how quickly it can turn to pure terror when that truck decides it wants your license plate as a grille ordainment.

I’d like to report a truck driver who’s been endangering my life.

Trivia: Duel was inspired by a short story of the same title written by Richard Matheson. He got the idea after dealing with a tailgating semi truck on November 22, 1963. The day President John F. Kennedy was assassinated. 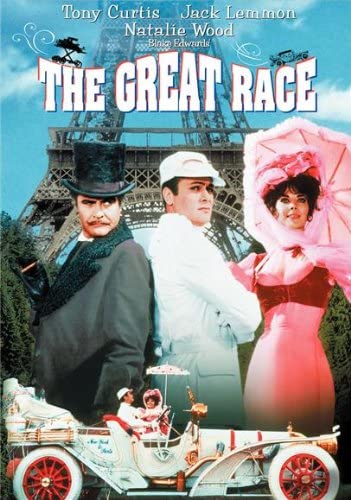 A nearly 3 hour long comedy about a race from New York to Paris set in 1908 – based off of an actual race of the same year. The Great Leslie (Tony Curtis) races against the dastardly evil Professor Fate (Jack Lemmon), with empowered journalist Maggie DuBois (Natalie Wood) along for the ride in this epic movie that became one of the most expensive comedies at the time.

The original budget was $3 million and ended up with a whopping $12 million dollar price tag. This movie would be the inspiration to the later famous cartoon series Wacky Racers. Once you see the film you’ll quickly see why. The Great Race features musical numbers, incredible stunts, the longest pie fight in film history, and the talented Jack Lemmon playing multiple roles.

Trivia: The famous pie fight lasts less than 5 minutes, but took 5 days to shoot. Jack Lemmon got knocked out by a pie (more than once) and Natalie Wood nearly chocked when a pie hit her in the face while her mouth was open.

An underrated comedy in itself Used Cars follows two used car lots in a turf war over which land will fall prey to a new highway off-ramp. Starring Kurt Russell as Rudy Russo, a fast talking used car salesman trying to buy his way into politics. Jack Warden plays a duel role as the Fuchs twins, and one of them is a real evil SOB who will do whatever it takes to ensure his dealership wins. Even if it means killing his own twin brother!

The movie is genuinely funny, destroys a 1957 Chevy Bel-Air in a test drive from hell, and features the two of the funniest used car dealership commercials ever produced! Oh, and it includes a cattle drive of what looks like 200 used cars driving across the desert. Not the mention this is filmed in 1980, a time when all of our dream cars from the 50’s, 60’s, and 70’s were just $700 dollar bangers and junkers.

Trivia: During the commercial featuring Marshal Lucky live ammunition was used to shoot cars on the lot.

Before Cannonball Run there was Gumball. The plot is a secret race from New York to Los Angeles with no rules, no catalytic converters, and no 55 mph speed limit! A very entertaining film that shows a group of outlaw drivers from all walks of live gathered to do this illegal race. The prize is the race itself. You will love this movie if you want to a 1966 Shelby 427 Cobra blast down the LA River at top speed, Gary Busey riding a Camaro Z28 on two wheels, a Ferrari Daytona literally outrunning a helicopter, or Raul Julia ripping the steering wheel out of a Ford T-bucket. I would say it is far better than Cannonball Run.

The first rule of Italian driving, what’s behind me is not important!

Trivia: Two 1974 Ferrari Daytona Spiders were used for the film. One of which used to belong to legendary voice actor Mel Blanc who voiced all our childhoods with the original Looney Toons.

You haven’t seen this movie you are missing out on probably one of the best written car movies made for car people. Porsche powered VW Beetles allowed stunt drivers to keep up with Ferraris, Jaguars, Cobras, and the infamous Apollo GT Thorndike special. If anything this movie also serves a heaping platter of eye candy in the form of late 60’s sports car racing. It’s a classic Disney movie about a Beetle that can drive and race itself. What’s not to love about the Love Bug?

There is something real about that little car – something that doesn’t even have a name.

John Belushi and Dan Aykroyd star as the Blues Brothers. Two jailbirds trying to get their band back together to raise enough money to save the orphanage they grew up in. On a mission from God, these two brothers are equipped with only a harmonica, a cop motor, and a band powerful enough to turn goat piss into gasoline. Their quest to revive the Blues Brothers Band takes them on an adventure that features James Brown, Aretha Franklin, Ray Charles, and Cab Calloway.

The Blues Brothers also has some of the craziest car chases in film history. They destroyed an actual shopping mall, dozens of police cars, and dropped a Ford Pinto from the sky during the making of this comedy, action, musical, crime movie.

When a comet creates a cloud of radiation over the earth it causes all machines on planet to come alive and turn on the humans who made them. It’s a story of the egg murdering the chicken as ATM’s, power tools, and lawn mowers turn into literal killing machines. Semi trucks roam in herds attacking motorists and corner a group of people at a truck stop. Leader of the multi-axel wolf pack is  a Green Goblin semi-truck, and force the humans into diesel pumping slavery.

This film was adapted from the short story Trucks written by Stephen King, and he also directed this movie. The soundtrack is wall to wall AC/DC and stars a young gun Emilio Estevez. Critics rate this movie very low, even Stephen King admitted it’s the worst interpretation of his written work –and he directed it! While I agree it’s not an Oscar contender it is definitely worth the watch if you like hard rock music, trucks, and watching a soda machine murder a dude with fast-ball pitches. This movie falls into the “so bad its good” category.

You wanna war?… You got one!

Trivia: Stephen King admitted in an interview that while directing this movie he was “coked out of my mind”, and did not always know what he was doing. 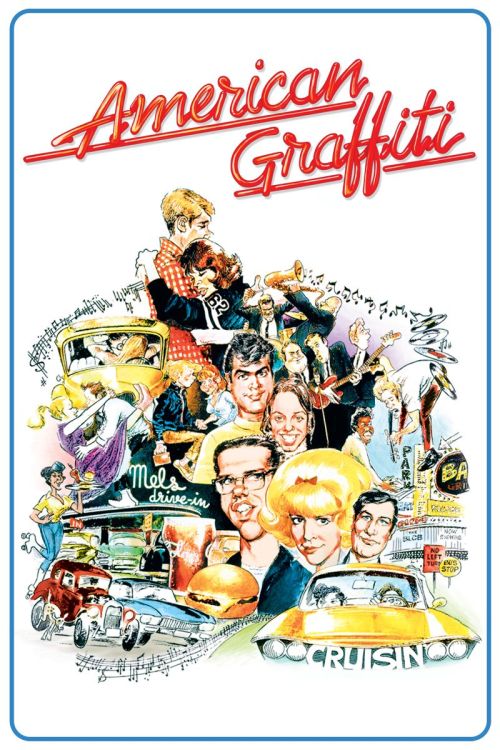 Before George Lucas was writing an Empire he wrote a coming of age story about a group of teens on their last night of summer vacation in 1962. They cruise the streets of small town California savoring the last night of their high school youth while Wolfman Jack plays the hits on the radio. This movie stars Ron Howard, Richard Dreyfuss, and features a per-Han Solo Harrison Ford.

Hey man, you’re suppose to be the fastest thing in the valley, but that can’t be your car it must be your mama’s car!