This story happened on April 19th in Bellingham, Washington. The owner was abruptly woken up around 6 am by the familiar sound of his 396 big block V8 firing up in a cold morning start followed by the sound of tires screeching down the driveway. His black 1969 Chevrolet Chevelle SS has been stolen!

A loud black muscle car with a vanity plate that reads ROWDY is not exactly stealth so cops were quickly tipped off about various sightings of the car. The driver accused of stealing the car is 28 year old Nicolas Bailey. After a few hours Whatcom County Sheriff’s department spotted the car and that’s when Bailey went full Ricky Bobby and hit the gas – hard.

The chase shifted into hot pursuit as the Chevelle races through the morning air of multiple small towns in the area. Bailey takes the muscle car on a wild ride forcing oncoming police cars to the sidewalk to avoid a head-on collision.
Authorities radioed ahead for spike strips as the Chevelle racked up traffic infractions.

Blaine, WA, Police department answered the call and got ready. But as the spikes were being prepared the Chevelle was rapidly approaching with its rally wheels spinning at triple digit speeds. Cops threw the spikes but the Chevelle swerved missing them completely. The sudden maneuver was too much for the millennial driver to handle as the car’s weight shifted and started to fish tail down the road before spinning out of control. 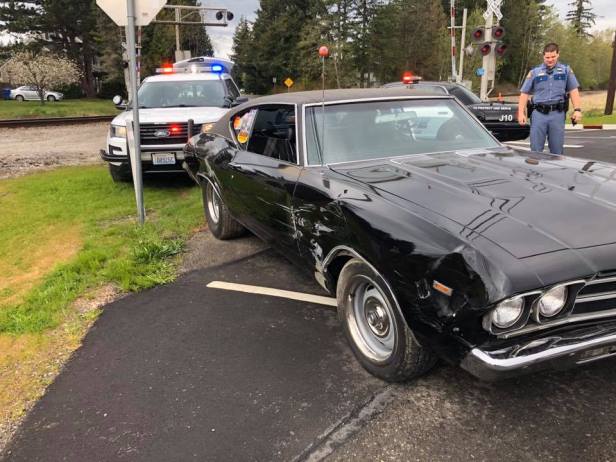 The Chevelle comes to rest at an intersection with damage on every panel. Bailey put up a struggle while being dragged out of the car by multiple officers. After the arrest he was taken to the hospital for a pit stop before his final destination at the county jail. A list of felonies awaits him. The Chevelle, damaged but not totaled, is returned to its rightful owner who is reasonably upset but relieved that to have his car back.
This guy went full Ricky Bobby, never go full Bobby.