The Art of the Wreck

There is an art to driving in a demolition derby. You have to be good at driving in reverse, figure out competitor’s weak points, and avoid taking hits in the radiator. I imagine you also need to know a good chiropractor and physical therapist. Nevertheless, here in America when one thinks of a demolition derbies you usually think of crushed beer cans, chewing tobacco, and yelling over the roar of open header engines. This video is from 2014, and already has over 3 million videos, and with good reason. This video is a 13 minute boxing match between two of the toughest Ford trucks I’ve ever seen!

Posted by EZ DUT IT Racing, the video stars their #64 Ford demolition pickup truck wearing black and neon green livery. Number 64 appears to be a mid to late 1960’s Ford F-100 that has already fought in 9 different shows prior to this one – according to the description in the video. 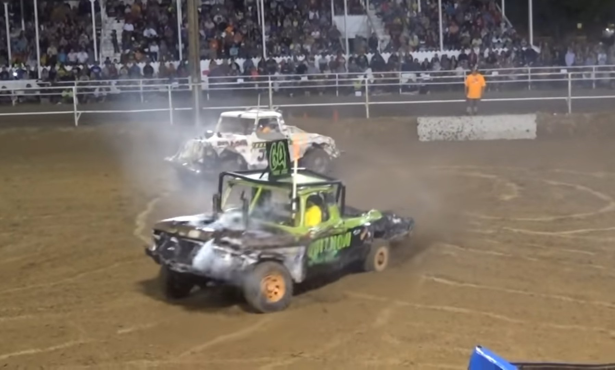 The truck is a seasoned veteran with a truck bed that’s been pan-caked into a flatbed and sporting what appears to be fork-lift tires in the back. A strategic move when you consider that fork-lift tires do not blow out and are designed to hold several tons of heavy machinery. It goes up against Junky, a mid to late 70’s white Ford F-100. Both trucks entered the ring with 3 other competitors that were quickly knocked out early into the battle leaving just the two to duke it out.

What ensues is 10 minutes of bare chassis boxing between as they bash and ram into each other. It is mesmerizing to watch as you wonder what is keeping these engines turning and wheels spinning. Just when you think they stalled out they fire back up and charge in full fury with high revving battle cries. It’s as if both these trucks knew this was the last ride and wanted to go out fighting.

Radiator hoses spill their guts, front end suspensions collapse, but these trucks still run and gun trying to deliver the final death blow. If you love trucks and good ol’ boy mechanical wizards then you’ll enjoy this video. My compliments to both teams for building these Viking spirited trucks that probably drove to trailers under their own power after the event.

One thought on “These Battered Ford Demolition Trucks Refuse to Die”