Special thanks to freelance photographer Patrik Karlsson for the cover photo to this article.

The Meteor Interceptor is Ultimate Power at the Lowest RPM’s

This is a story of a man and his dream for ultimate power at the lowest RPM’s. A man from Sweden named Daniel who had a simple idea. He wanted to build a car with a large engine. Not just any big block engine, an Alaskan (bigger than Texas) engine born from the ashes of fallen fighter planes. An engine named after an astronomical missile. He’s the guy who swapped a 27-liter, 1,650 cubic inch, Rolls Royce Meteor V12 tank engine into a Ford Crown Victoria Police Interceptor.

Daniel does not run a high-dollar custom car shop. Nor does he have bank accounts in the Cayman Islands. He is 40-something IT professional from Stockholm, Sweden, who loves cars. The Meteor Interceptor is his idea of a dream car. We all have a preference. Some people get a kick from milk carton sized engines spinning at 8,000 RPM. Others like gas chugging V8’s that idle like the Cookie Monster. Then there are people like Daniel who get a thrill from massive engines capable to moving massive machinery. The Tonka-mentality of having total control over 27-liters of fuel burning fury pushing 12 Thor’s hammer sized cylinders producing industrial size levels of power.

Why a Tank Engine?

As stated before, this is not a SEMA car being built by a six figure garage in Las Vegas. This is a solo project by a car-guy trying to bring his vision to life. If money were no object he would have ordered a 2100 HP engine from Sonny’s Racing for a cool $110K. Daniel wanted a Jupiter sized engine without needing to refinance his mortgage. The first engine he found was a 36-Liter Rolls Royce Griffon V12, but that too proved to be out of his price range. As well as finding out that trying to convert an aviation engine to land comes with its own set of engineering hurdles. While doing this research he discovered the Meteor engine.

Then, like all great stories, Daniel met “a guy”. A guy in Finland who had purchased 50 Meteor Mark IVb engines from the Swedish Army. The last war Sweden took part in was 1814, so why not sell some surplus. The Mark IVb is a later Meteor engine model with roller rockers which was exactly what Daniel wanted. In 2919, Silodrome posted an article about a Meteor engine for sale in the US for a little under $6k. It is literally a lot of bang for your buck when you think about it. One ferry ride across the Baltic Sea, and road trip to Finland, later the Meteor engine was his. 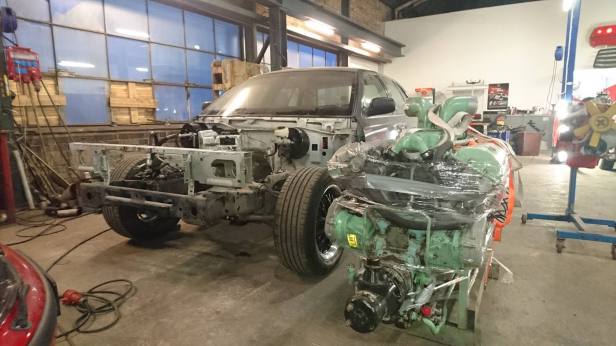 The Rolls Royce Meteor is a sibling from the more popularly known Rolls Royce Merlin V12 famously used in WWII fighter planes like the Spitfire, Hurricane, and the P-51 Mustang. The Meteor engine was developed using Merlin parts salvaged from wrecked airplanes. The parts were not suitable for flight but still useful for a land based engine. World War II was no time to simply throw away spare engine parts, and there was a need for a new tank engine thus Meteor was born.

It quickly found a home in Cromwell tank in 1943 and became the fastest British tank thanks to its low stress, reliable, 550 horsepower performance. The Cromwell had a top speed of 40 mph making it the fastest British tank of its time. Over the years the Meteor evolved and at its peak was putting out 650 horsepower and turning 1,450 lb-ft. of torque at 2,400 RPM. The Meteor engine stayed in production until 1964.

A Crown Vic in Sweden

Daniel needed a large sedan with a body on frame construction. An old Rolls Royce came to mind but finding affordable Rolls with no rust in Sweden is difficult. Suddenly this 2006 Ford Crown Victoria Police Interceptor popped up. It was a former patrol car in Stockton, California, that had ended up in Sweden and in solid condition. Daniel bought it and immediately yanked out the 4.6 modular V8.

Stuffing a V12 Tank Engine into a Ford Crown Vic

For anyone who’s never seen a Meteor engine up close it’s about the size of an original Fiat 500. Needless to say, one of the items on the to-do list is fabricating a XL hood scoop for the Crown Vic. The great thing about the automotive community is that whatever the issue, no matter how crazy the project, odds are someone had also tried it.

Daniel found an article featuring a man named Charlie Broomfield who had successfully fitted a Meteor engine into a Rover SD1. He called Charlie who turned out to be an expert on these engines and was more than willing to help out Daniel with his Interceptor. This is the very reason why I enjoy the automotive hobby – there is always a helping hand. 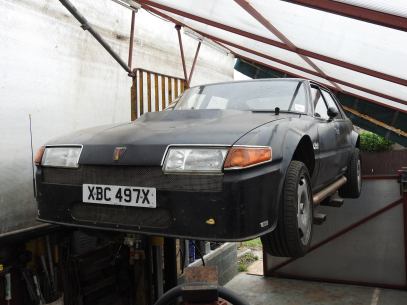 Charlie became a massive asset for project Meteor Interceptor. Charlie had developed an adapter to merge the Meteor to a automatic transmission using planetary gears from an Allison transmission. Charlie offered to build an adapter plate for Daniel.

When it was finally done Daniel did not want to risk this heavy, valuable, part to a delivery service, nor could he carry it on a plane. It took 4 days to travel 4,600 kilometers to bring this adapter from Charlie’s home in Lincolnshire, UK, back to Stockholm. Roughly the same distance from New York to Los Angles. The things we do for our dreams. 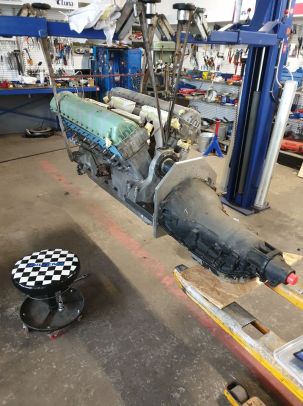 The Meteor engine adds over 650 pounds to the Crown Vic’s front end. To compensate for the weight he plans to use a heavy duty aftermarket Chevrolet C-10 front-end. A support frame has been added that runs the entire length of the Ford’s chassis. For balance the Meteor sits as far back as possible. The front windshield had to be removed. The firewall was cut to scoot the engine back, and both front fenders and hood will be fiber glass to reduce weight. 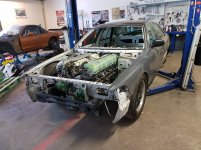 Daniel says this car is definitely not going to be a street legal. It’s going to be a land speed racer with a goal to join the 200 mph club. The final obstacle will be seeing how the Crown Vic’s aerodynamics handles the Meteor’s power once it gets rolling over 150 mph. “Shear madness” is the usual responds from friends, family, and people when they hear his idea or see photos of the car.

The Meteor is going to be fitted with twin-turbos. To make sure the Meteor is running smooth are Arctic mechanics Mattias Safsten and Jonas Nilsson. They built a race boat called Sverige S1 powered by Twin Meteor engines running pro-superchargers! They heard about Daniel’s built and offered to help him tune his engine using a MaxxECU similar to Sverige S1. The plan is to ensure the engine is running like a sun dial before going through the trouble of adding a twin-turbo set up. The end results should be enough torque to stir the Earth’s molten core. 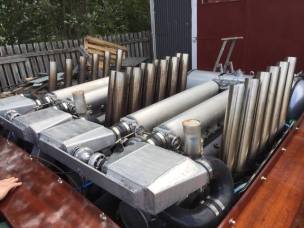 Daniel’s Meteor Interceptor is a great story of inspiration for anyone with a project car dream but feels discouraged because they don’t have the space, the tools, the know-how, or the budget. He drives nearly 8 hours just to see his Interceptor for it currently lives at a shop that belongs to a friend near the Arctic Circle in the city of Umea.

This project has taken 3 years so far and progress has slowed down thanks to COVID-19. However, Daniel’s goal is to have the engine running inside the Ford’s engine bay by the end of 2020. After that he will face an entire new set of obstacles that he will need to overcome. Problems like steering, aerodynamics, braking, etc. You can follow his progress on Facebook and Instagram.

The anticipation is building for the day Daniel can fire up the Meteor from behind the driver seat. Paint ideas for the Crown Vic include a matte grey WWII style fighter plane livery. Staying true to the car’s law enforcement heritage a friend of Daniel’s made a shield for the car adapted from the NYPD badge dressed with the Kingdom of Sweden name. 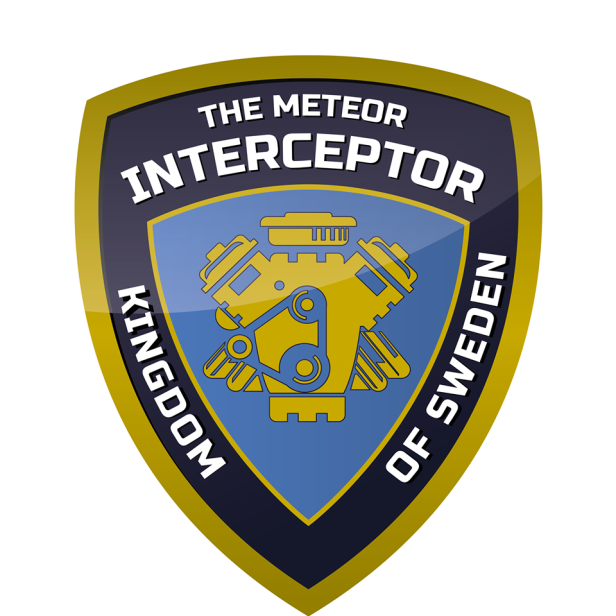 Daniel is open to sponsorship to aid his build. As long as he has the support of his wife, friends, and maybe a sponsor or two, Daniel will keep working to finish this car. Achieve his vision of unlimited power at 2,500 RPM.

Daniel would like to express his sincere gratitude and appreciation to the following for their help and support with the Meteor Interceptor: