What Makes a Movie Great?

My mother always tells me what separates a great movie from a classic movie is usually the soundtrack. Which I think we can all agree is true in films like Jaws, Terminator 2, Spaghetti westerns, and Star Wars wouldn’t be the same without their memorable tunes. Just hearing their respected musical score can spark visions of your favorite scenes from each movie. The same can be said about stunt people. You can have the best film director and editor in the business, but their vision doesn’t make it to the big screen if the stunts can’t be performed. Carey Loftin made a lifelong career of bringing the visions of some of the greatest film directors in history to life as a stunt driver.

You may not recognize the name, or if you do its vague and fuzzy from sitting in the back log of your memory bank, but you will most definitely recognize his portfolio. Some say he was the “Greatest car man in the business.” If you watch any film from the late 1930’s to the late 1990’s there is a good chance Loftin worked on it as a stuntman, driver, coordinator, or actor. The list of ionic movies he has been a part of is truly remarkable.

Born in Blountstown, Florida, in 1914, but growing up in Hattiesburg, Mississippi, Loftin began his career in show business as a member of a traveling motorcycle stunt show in the early 1930’s at the age of 19. The story of how he was hired for the show is a perfect example of the type of character Loftin was, but first I have to mention his first motorcycle.

His first bike was a single-cylinder Indian that cost him a whopping $10 bucks! A total beater of a bike that made a mechanic out of Loftin. Story goes that the cylinder in the old Indian was so loose that it rattled around until it finally cracked. Not having the money to buy a new replacement he did what a lot of us have done at some point, he went to a junkyard.

Loftin wanted to find a piston from a car that he could adapt to his bike. When he finally found one that fit inside the barrel he noticed that it was too tall. Broke ingenuity took over and Loftin simply took a file and hand-grounded the piston head until it was short enough to fit, but now he was left with a cylinder head that was domed instead of flat. That domed cylinder made the engine stronger than ever and converted the bike into a sleeper. Loftin was untouchable with it.

In 1933, the traveling motorcycle stunt team arrived to his town with Skip Fordyce leading the show. During the show, Fordyce had just finished a routine and was addressing the crowd when someone blurred out “I can do anything you can do!” Fordyce looked up into the stands to see a young lean kid with a burning determination in his eyes. It was Loftin. Fordyce didn’t hesitate and asked him to prove it, and Loftin responded by climbing down and disappearing.

Thinking that he had called cocky punk’s bluff Fordyce went back to addressing the crowd when he suddenly heard a motorcycle rumbling in the distance and getting louder. Out comes Loftin on his old Indian. Loftin started riding around the area using his motorcycle as a balance beam to perform all sorts of aerobatics in front of the crowd, and Fordyce hired him on the spot.

Carey Loftin was inducted into the AMA Motorcycle Hall of Fame in 2001.

There is no way I can write about every great example of stunt work Loftin did during his 300+ movie credits over a 60+ year career without writing a book (possible project for the future), but I can talk about my favorite examples that I feel are definitely worth mentioning in his memory. 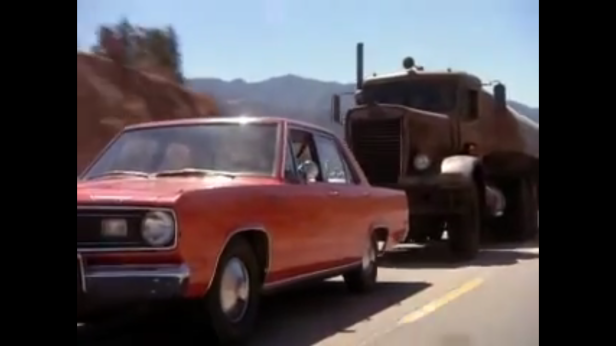 A cult classic for anyone who likes cars and trucks, and one of Steven Spielberg’s earlier films that tells the story of a middle aged man (played by Dennis Weaver) being chased through the desert by a psychopath driving one of the most evil looking tractor trailers to ever grace the big screen. Loftin played the psychotic trucker, although the only part of him you see in the film are his hands and feet.

He did all the stunt driving in the turbo charged diesel truck. Loftin had a special forte for driving semi-trucks, a real gear-jammer, as shown in the movie as he makes the 1955 Peterbilt 281 move like a jaguar while chasing its Plymouth prey throughout the film. Who knew a film about a man trying to outrun a grease covered truck could be so suspenseful. Definitely a film worth watching if you haven’t seen it already, it makes most modern suspense films look like cheesy B-movies.

Plot aside, what makes this movie worth mentioning is the car chase scene between Jeff Bridges and James Woods’ characters. A red Porsche convertible and a Black Ferrari go wheel to wheel in a street race through LA traffic. Loftin was 68 years old when he got behind the wheel of the black Ferrari, an age when some people are thinking about giving up their driver’s license. The Ferrari does most of the white knuckle driving in the scene as it drives against the flow of traffic.

One scene that always gets me is a shot from the Ferrari’s wheel where you see both cars coming within inches of each other as they pull hard into a turn. Precision driving at its best. If I live to be 68, and driving is still a thing, I hope I’m 10% as sharp of Loftin was during this scene.

Loftin Was in Everything!

The Deer Hunter, Bullitt, Vanishing Point (both films), The Love Bug, Some Like it Hot, It’s a Mad Mad Mad World, Maximum Overdrive, Smokey and the Bandit I and II, The Great Race, The Goonies, The Getaway, just to name a few of the films he worked on. Loftin also did a lot of TV work in shows like The A-Team, The Dukes of Hazzard, The Man From U.N.C.L.E, and Rockford Files. We owe a lot of our favorite movies to Loftin’s skill for making the impossible, possible.

Retired But Not Tired

Loftin retired at the age of 77 in 1991, but kept on working in films and television. Just because you’re retired doesn’t mean you have to stop moving. His last job was in the Patrick Swayze film Black Dog, driving a semi-truck of course. Loftin passed away in 1997 of natural causes at the age of 83, which for a man who gambled with his life for so many years it’s nice to know that he left this world peacefully and not tragically.

It is easy to take stunt people for granted since they are so often in the shadows of the Hollywood spotlight. Let us not forget that without their bravery and complete disregard for their own safety, movies and television would be so dull. Why they have an academy award for Best Title Writing and not Best stunt in a movie is beyond me, but if they did Carey Loftin would be the Meryl Streep for that award.

Below are video links that showcase Loftin’s expert wheelman ability.

3 thoughts on “Carey Loftin – The Mohammad Ali of Stunt Drivers”