Last year I wrote a piece stating that second generation Dodge Chargers are the Sean Bean of movie cars. Why? Because if you see a 1968-1970 Dodge Charger in a film or TV show the odds are that it’s going to be jumped, crashed, totaled, or rolled for the sake of action. The Dukes of Hazzard alone destroyed over 300 of these desired machines throughout the series. The terrible film they made in 2005 destroyed around 30 Chargers on its own.

The 2017 Detroit Autorama provides a perfect example of this. The video below captures a General Lee getting demolished by gravity when it slams to the ground after hitting a ramp at 55 mph.

Naturally, 1968-1970 Dodge Chargers are now becoming rare and expensive. Hollywood has to turn over rocks trying to find examples that are not too nice to wreck and not completely eaten away by rust. Remember, these are unibody construction vehicles. No chassis to hold them together, which is why they crumble like soda cans during high impacts.

Thankfully, Smiths Bros. Restoration has come up with a cost effect solution to save the remaining Charger herd while still giving the people what they wanted in a stunt car. The answer to saving a Mopar is to use a Ford instead!

Jamie and Bob Smith have worked with Dukesfest for the last 17 years helping to build stunt cars for the show. When Ben Jones (Cooter), and his wife Alma, asked them to provide a General Lee jump car for this year’s event Jamie had a thought. He wanted to build a stunt car that was safe, could survive a two day stunt show, without using a vintage Charger. One that could be put back on the road.

What the Smith brothers did was take a 1999 Ford Crown Victoria P71 interceptor, previously used by the Portland Police Department, and transformed it into a General Lee stunt car. The logic for using a P71 was simple. They are cheap to buy, strong, and there are plenty of them still around. The wheel base of a 1999 Ford Crown Vic is 114.7 inches and the wheel base for a 1969 Dodge Charger is 117. The end results look spot on and will fool anyone on screen when it’s flying through the air, sliding through turns, or driving on two wheels. The main give away is the interior which looks like a Crown Vic, but who cares? It’s built to do a job.

Hard to believe its the same car right?

Jamie stated that they had the car running and driving within three days. They took the Crown Vic and stripped the entire body leaving just the panther chassis, interior, and drivetrain. Then they started building the roll cage which also served as the body frame to fit new Charger sheet metal. Auto Metal Direct sell basically all the sheet metal one would need to restore a second gen Dodge Charger, or build one from scratch.

They used the roll cage as the A-pillar which meant it was the same shape as a Charger which allowed them to use an authentic 1969 Dodge Charger windshield and cowl. The only real vintage Mopar pieces on this build were the front fenders, hood, and trunk lid that were too rusty to use on a restoration. This is a stunt car, not a show car. 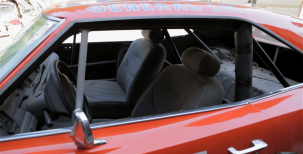 The Goal is to Save Chargers

Now, anyone who says this is an unholy union in the gospel of Mopar is missing the point. This is to save all the surviving Chargers left on this planet. Saving them from a glamourous wreck on a movie set or stunt show. Auto Metal Direct can supply the parts we need to restore the rust buckets hiding in the fields of America.

As Jamie said, “if this car has a VIN number it’s repairable, no matter how much rust is in it.” At Dukefest this summer, the Ford General Lee successfully cleared both jumps proving that it the car works.

I hope the Fast n Furious franchise sees this video and follows the Smith Brother’s lead. (I’m looking at you Dennis McCarthy!)

This is a great idea with a lot of possibilities for future film projects. Not to mention that anyone with an old Crown Vic can now build their own Charger. Will it be perfect? No. Will some Mopar guys/gals give you dirty looks? Of course! But you’ll be able to drive like a Duke boy with the peace of mind that whatever falls off won’t be factory original.

Check out the video on how this Crown Vic was transformed into a high flying General Lee.