A Geyser of Steam

Last month my ’06 Toyota Tacoma suffered a catastrophic overheated engine. I was halfway through a 150 mile journey when I noticed the temperature gauge suddenly inching its way towards the red. My first thought was, “This is a Tacoma! Top Gear told me these never break down. What the Hell!” Sure enough the engine started to feel sluggish and found myself on the side of the highway looking at a geyser of steam shooting out of the radiator cap like a scene from a movie.

Thankfully, after years of dealing with unreliable vehicles I knew exactly what to do. But do you? If your engine suddenly decided to throw a temper tantrum on the way to work would you be able to get it back on the road without calling AAA or posting about it on social media?

What to do if Your Engine Overheats:

The most obvious sign of an overheating engine is the temperature gauge suddenly rising, moving, or showing a higher temp than normal. Don’t know what it looks like? Scan the dashboard for symbols that look like this:

Modern vehicles are very good at warning if something is wrong thanks to a wide array of bongs, beeps, and dings. Physical warning signs include reduced engine performance, a faint smell of toasted metal and boiling water. During extreme cases the vehicle will stall out in a cloud of smoke when it becomes too hot.

Once you become aware that something is wrong, don’t panic!

1) PULL OVER: Find a safe area to stop the vehicle and turn the engine off.

2) POP THE HOOD: With the engine switched off pop open the hood to allow heat to escape. Everything under the hood is going to be extremely hot so take caution when opening the hood. An open hood will allow the engine to cool faster. Have a cloth rag handy if possible to avoid touching the hood release or other engine components with bare hands.

If steam is pouring out of the engine DO NOT try to open the hood. Let it cool first.

3) WAIT: Allow the engine to cool on its own before approaching the radiator cap. With the engine shut off it will gradually cool itself. It is recommend that you wait anywhere between 20-60 minutes before attempting to touch anything in the engine bay.

4) RADIATOR CAP: The radiator cap is where you will need to add coolant (also referred to as Anti-freeze) in order to cool off an engine. BUT! Built up pressure from an overheated engine could potentially cause an eruption of boiling hot coolant to shoot out from the radiator causing serious skin burns. Approach it with the same caution as a violently shaken can of diet soda that someone dropped a sleeve of Mentos mints before sealing. Extreme caution.

5) REMOVE RADIATOR CAP: Most vehicles will have the radiator cap located at the top of the radiator which is usually placed directly in front of the engine. Look for something that looks like this: 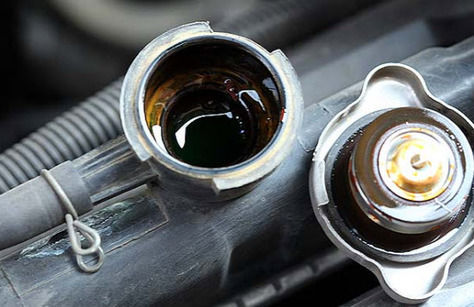 Slowly open by twisting the cap and listen. If you hear the sound of gas escaping allow it to escape before completely opening it. Again, treat it like a shaken can of soda and allow the pressure to escape before fully removing the cap off the radiator.

6) WATER or COOLANT? The radiator’s job is to hold coolant that cycles throughout an engine and keep it running at an optimal temperature. Most gas stations will sell gallon jugs of engine coolant, but you may use water in an emergency. If you use water it is highly recommended that you take your vehicle to a mechanic to perform a Radiator Flush afterwards. 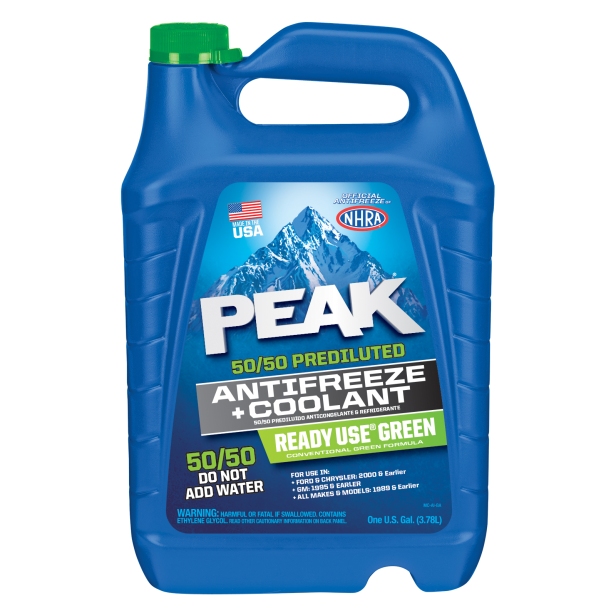 Water is not recommended to use in a radiator because it can rust the inside and ruin the radiator, and could potentially clog up radiator hoses which can cause the engine to overheat.

7) TURN ENGINE ON & POUR COOLANT INTO RADIATOR: Why does the engine need to be on? Because it will allow the radiator to shoot coolant back into the engine and cool it more efficiently. Fill the radiator until it reaches the top. Add coolant to the reservoir that is usually either on top of the radiator or off to the side of the engine bay. It is a clear plastic container. Fill the reservoir up to the level labeled on the side.

Check the temperature gauge to ensure that it is dropping back to a normal reading. If it does not lower then there is a larger mechanical issue that needs to be addressed.

8) CHECK FOR LEAKS: After you’re done filling up the radiator with coolant look underneath the vehicle for any noticeable leaks. Inspect the rubber hoses that lead from the radiator to the engine itself. These are the most common causes of overheating as they can rip and start to leak over time. Can you drive with a radiator leak? Yes, but you will need to stop again to refill until you reach the nearest repair shop.

9) NO LEAKS? TOP IT OFF: Once the temperature is back to normal and you don’t see any leaks you can now get back on the road. Use caution and keep scanning the temp gauge to see if it starts to overheat again. Engines don’t overheat unless something is wrong with its cooling system so it is advised to have it inspected by a certified mechanic or repair shop as soon as possible. There are several components in a vehicle’s cooling system that could cause it to overheat.

Dealing with an overheated engine is not an overwhelming ordeal. No worse than a flat tire or locking your keys inside. The main danger is avoiding boiling coolant that can shoot out from the radiator if you open while the engine is still under extreme temperature. So, don’t panic, Pull Over, Wait, Pour, and Check for Leaks. That’s all there is too it.

Be safe out there and happy motoring!