I must admit that I did not know who Joe Bailon was until it was too late. When I read that he had passed away, at the age of 94 on September 25th, I felt bad that I didn’t get to appreciate his work while he was still alive. Especially after I read his about his life’s work and found out that he was the man who invented Candy Apple Red. A color that took 10 years to perfect!

You be hard pressed to find a vehicle that didn’t look good in a shade of red. From arrest me red, fire engine red, Ferrari red, but the one that people know the most is Candy Apple red. Even if they don’t know exactly what it looks like they know that with a name like that it’s going to looks gorgeous. 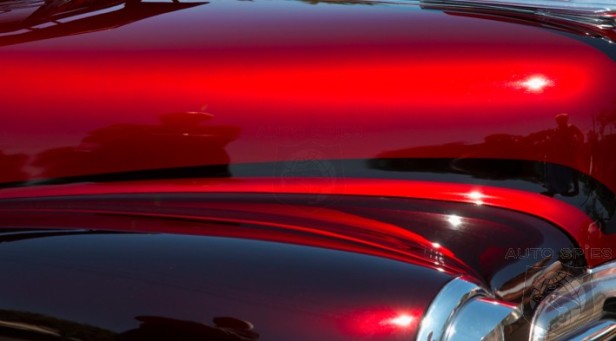 The process is easier said than done. You need to apply a layer of gold paint first. Then add red paint over it, and finally a layer of clear coat. The trick is to mix red paint with the clear coat to get that rich saturated red that looks good enough to eat. Bailon’s paint jobs were famous for looking like ultra-smooth and thick enough to cut with a knife before hitting bare metal.

Inspiration for Candy Apple red, according to the American Hot Rod Foundation, came from Bailon’s fascination with how taillights looked at night in the rain. That rich shade of red that made him think about how an entire car would look in that color. Story goes that he was driving one night and noticed the taillights in the car in front of him. Glowing in the night. That image was burned into his brain and for the next 10 years he set to recreate that color by mixing countless paint combinations in his shop.

It wasn’t until 1956 that he finally got it right. He sprayed a layer of gold and chased it with a shade of extra-brilliant maroon and topped it off with clear lacquer. The rest is Kustom history.

Born in March 18th, 1923, in Newcastle, California, Joe Bailon was the youngest of ten children. Bailon is a legend in the hot rod community and was a master builder when it can to kustom cars, and no that’s not a typo.

Today we call it modding, but in the early days of Hot Rodding a subculture was born that didn’t focus on going fast. Instead, they wanted to look good. Make their cars look like their strutting down the boulevard. Kustom car culture was created.

It took the hand of a craftsman and the eye of an artist. The ability to imagine a car made up of parts from others in order to build a vehicle that was different, but familiar at the same time. Try taking an Audi R8 and imagine improving its image by using body parts from a Ferrari, dash from a Lamborghini, and wheels off a Bentley. Granted, back then cars were way easier to take apart and modify. No computers, sensitive technology, or carbon fiber, back then it was just pure steel and chrome. Add heat, and a bit of melted lead, and you could mold fenders, bumpers, or body panels into whatever shape you needed on your custom lead sled.

The car that put Bailon on the map was Miss Elegance a 1941 Chevrolet that he rescued after from a junkyard. According to the full story on this car at Custom Car Chronicle, the Chevy had rear ended a Navy truck. The front end and ride side were damaged. But being as these cars were built like tanks Bailon simply removed the damaged fender, fixed the radiator fan, and was able to drive the car back to his shop.

(All photos of Miss Elegance are courtesy for Custom Car Chronicle.)

Soon after he immediately started to working on it. He chopped the roof about 3 inches and order new fenders for the car and molded them to the body to give it a smoother look. The rear fenders were off a 40’s Cadillac because they were longer and gave the Chevy look sleeker. Later on the front fenders were swapped for a set from a 40’s Oldsmobile which were the same size but longer which really changed the Chevy’s look for the better. The third version of the car came when Bailon was inspired by the legendary car the Tucker Torpedo, and he reshaped the rear fenders.

The front end was custom as well and over the course of Miss Elegance Bailon created seven different front ends for the car. An artist’s biggest critic is him/herself so Bailon was always modifying the Chevy after it was done because he kept thinking of new ideas to make his vision a reality. The taillights were fitted from a ’49 Ford. The wheels were crafted from plow discs off a piece of farm equipment and cut to 16 inches with a Studebaker door ordainment as the center piece. Even the steering wheel was taken from a ’52 Lincoln. 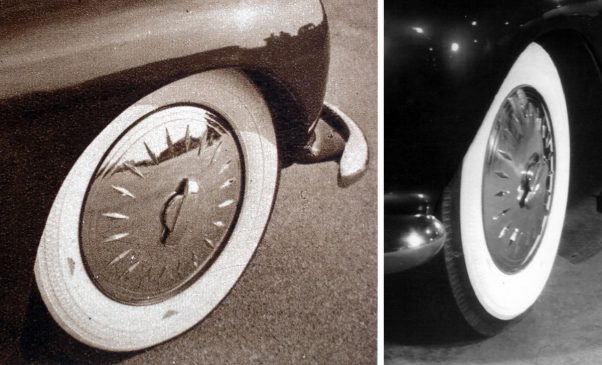 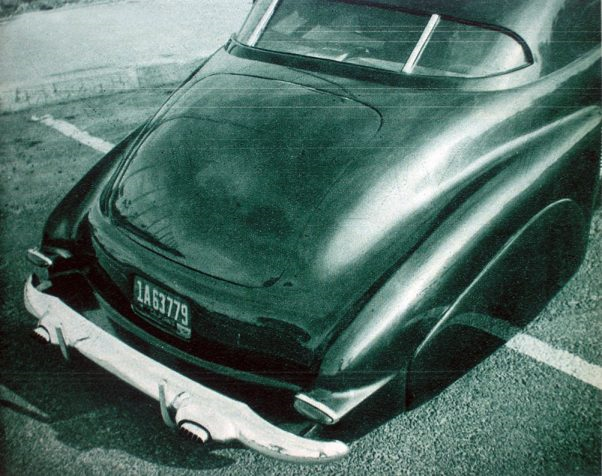 The interior was another feat in itself. He removed the dashboard and made a new one from scratch using black sheet metal. He created holes to fit 13 gauges and 32 dash knobs to make it look luxurious and futuristic. To top it off he had the whole piece chromed and the interior was dressed in a dark red velvet that was upholstered by Bailon’s second wife. Miss Elegance’s color was a base coat of yellow over a maroon finish with silver to add a hint of sparkle giving the car a dark, rich, shade of red. This was pre-Candy Apple red. 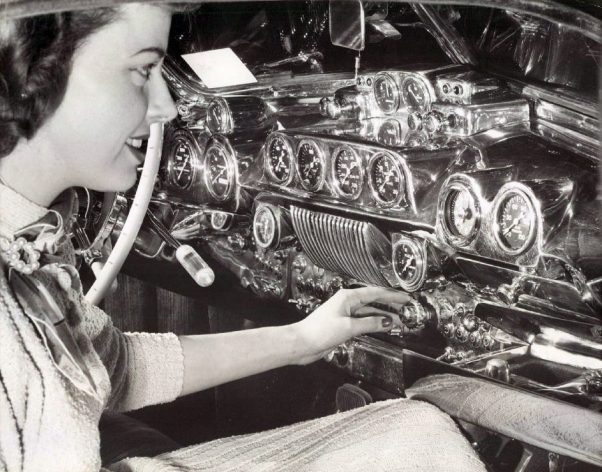 Miss Elegance was shown at the Oakland Roadster show in 1952 and in ’53, winning several awards in both. By 1953 Bailon sold the car because he needed the money for other projects. Miss Elegance was sold to a used car dealer for $400 bucks, after it was estimated at a worth of up to $12,000. The problem with custom cars is that it can be hard to get your money back because its custom; meaning it may not be to everyone’s taste. Miss Elegance sat on the lot for a while before being sold.

Bailon recalls seeing his car around town a few years later parked on the side of the street. The paint was ruined and it had a big dent in the roof. Then it was sold to a new owner who repaired the roof, fitted a Hemi engine, opened up the fenders and fitted big tires in the back. He used Miss Elegance for drag racing. From award winning Kustom to drag racer. 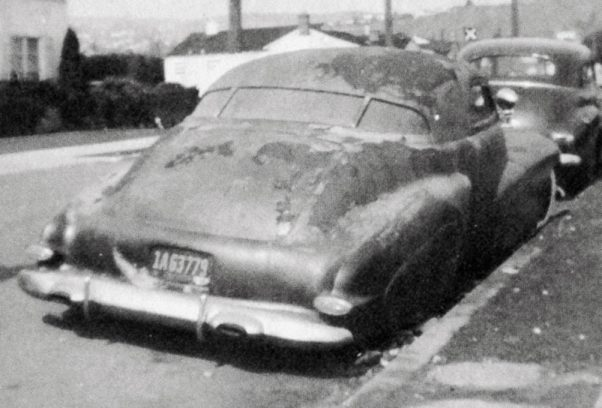 Unfortunately for Miss Elegance, by the 1970’s the current owner had gotten divorced and the car was crushed. The owner managed to remove the custom made hub caps and the junkyard removed the customer dash before destroying the car. The dash was later returned to Bailon who used it as inspiration to build a Miss Elegance II. The car would be built around the dash. A project that was meant for spare time and was an off and on build that was sadly never completed at the time of his death this past week.

A Pioneer in Automotive Art

Joe Bailon will live on in the imagination of anyone who wants to see their vehicle in a rich candy color. Regardless if it’s a wrap or a full paint job. What I admire about Bailon, and car builders of that era, is their genius for detail. I can’t imagine how long it would take me to build a car the way they did. The imagination and skill involved is nothing short of amazing and should be recognized and admired for generations to come. 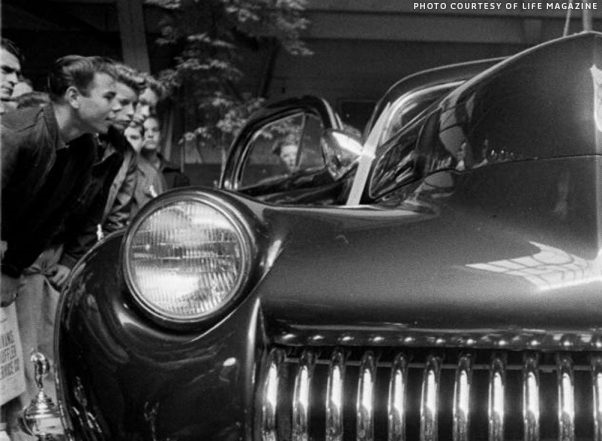 Thank you Joe Bailon for inspiring those after you and giving us the technique to create one killer paint job. May you forever rest in peace.

5 thoughts on “The Story of Joe Bailon, Creator of Candy Apple Red”